Just over four months ago, at Chirp, our Twitter developer conference, I talked about how “Twitter is too hard” and what we’re doing to address that.

One major area of difficulty I highlighted was getting Twitter on your phone. We did iPhone user tests and confirmed that even though there was a plethora of third-party Twitter apps, people were having trouble finding and selecting one because none were called “Twitter.” This kept them from using Twitter at all. For this reason, we acquired Tweetie and turned it into Twitter for iPhone, complete with a new user sign-up experience.

Mobile apps – Everywhere
We quickly understood that we were doing users a disservice by not having a great client on each of the major mobile platforms. So, we took a similar approach with Twitter for BlackBerry (developed by RIM) and Twitter for Android, which launched a new version this week.

This strategy has been quite successful. Total mobile users has jumped 62 percent since mid-April, and, remarkably, 16 percent of all new users to Twitter start on mobile now, as opposed to the five percent before we launched our first Twitter-branded mobile client. As we had hoped in April, these clients are bringing more people into Twitter, and, even better, they are attracting and retaining active users. Indeed, 46 percent of active users make mobile a regular part of their Twitter experience.

How people are using Twitter
Our Twitter for iPhone and Twitter for BlackBerry clients are now two of the most popular ways to use Twitter. This may not be surprising. What may be more surprising are the other top ways people use the service. The following chart shows the top ten applications people have used to access Twitter in the last 30 days. This is based on number of unique users. That is, out of all the people who logged into their Twitter account during the month, what percentage did so via each service. (The total is more than 100% because people often use more than one app.) 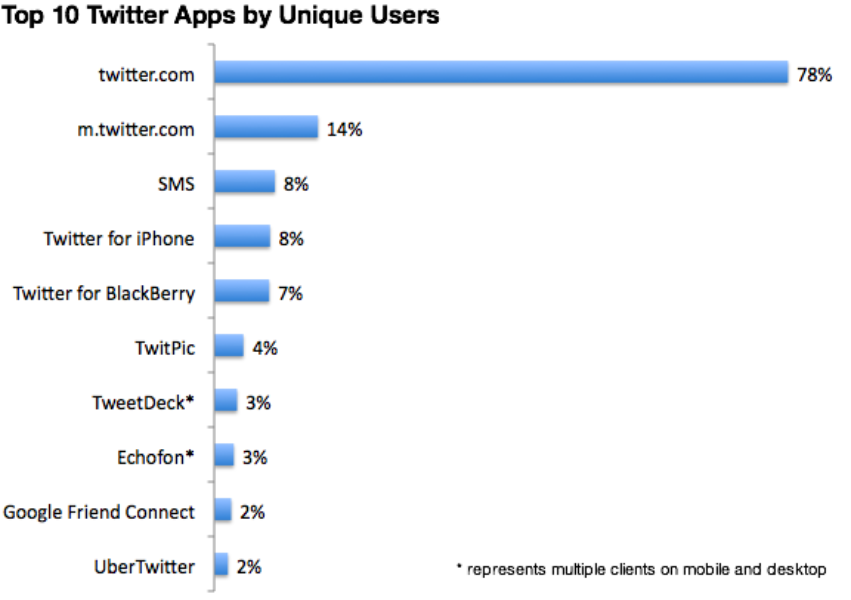 As this data shows, while smart phone clients are important, there are even more people who use the mobile Twitter web site and/or SMS. We’ve been seeing strong growth in both of these areas.

You’ll also note that third-party clients continue to play an important role for many people. And, it should be underscored that users of programs like TweetDeck are some of the most active and frequent users—which is why, along with the nature of how these clients work, a disproportionate amount of the traffic from Twitter runs through such tools.

And, while the percentage of overall users drops off pretty sharply after the few listed here, there are a tremendous number of other apps that people are using, not necessarily as their main Twitter client, but as an alternative way to create or view Tweets. The number of registered OAuth applications is now at almost 300,000—this number has nearly tripled since Chirp. (This can include multiple instances of the same software.)

It’s great to see this kind of variety and growth in the ecosystem as it moves beyond basic Twitter clients. These new services help people get the most out of Twitter, contributing to user growth and new business opportunities—both of which are critical to the long-term viability of the ecosystem. We’re making great progress in these areas—we currently have more than 145 million registered users and the performance of our Promoted Products has exceeded our expectations. But we still have lots of room to grow and improve. We look forward to seeing what’s next.