Top Gun or Top Cat, TweetDeck v0.36 Will Take Your Breath Away

“I feel the need — the need for speed!”
Top Gun

You may have thought that scorching through your Twitter feeds at the speed of an F-14 fighter jet was reserved for just the Mavericks of the world, with their Bomber jackets, Aviator sunglasses and User Stream TweetDecks. And, until today, you would have been right.

But today’s the day when everything changes.

All you need is to upgrade to the new, consolidated, all-in-one, turbo-charged-by-default TweetDeck v0.36.

The Story so far…

A long time ago in a galaxy - oops sorry, wrong film!

Back in July, Twitter enabled testing of a new way for third party clients to access the service in true real-time. This User Streams API allowed instant delivery of tweets, as opposed to the old API which relied on clients regularly checking for new tweets every few minutes.

To coincide with this launch we introduced a new version of TweetDeck that offered Twitter streams in awesome real-time. Recently, Twitter made the User Streams API fully live, at which point we removed the whitelist from our User Streams TweetDeck version and made it downloadable without having to signup.

Today we are completing the process by finally combining the User Streams Preview version of TweetDeck and the “original” version, to make one consolidated app that can switch between streaming and non-streaming at the flick of a switch.

So now, whether you’re a Top Gun or just a top cat, thre is just one version of TweetDeck for you. Simple!

Once you install v0.36, you will be automatically using real-time streaming for Twitter. In this way you can experience first-hand what it means to use TweetDeck in true real-time. 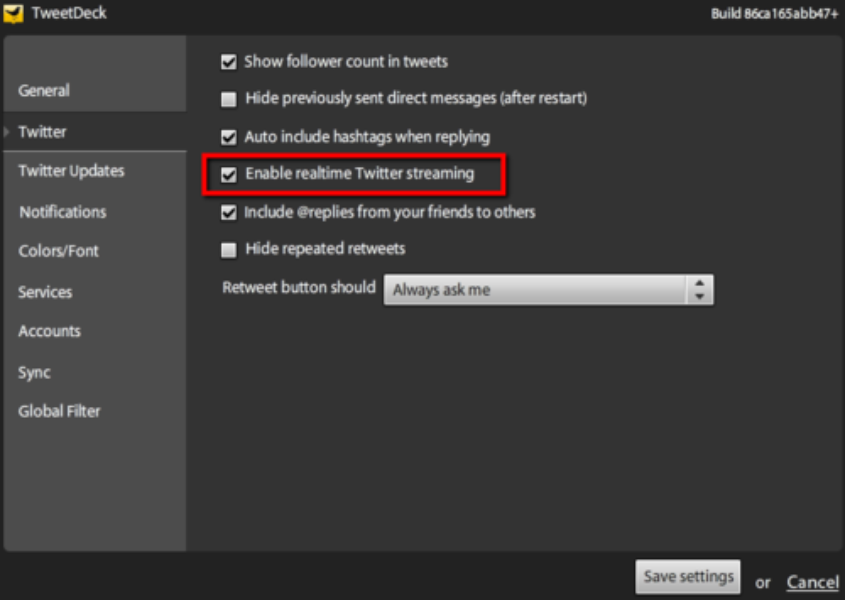 With real-time streaming disabled, your TweetDeck will operate just as it previously did. If you change your mind and want to re-enable streaming, just turn this setting back on and your updates will start flowing at top speed once again.

You can’t just expect to jump into your F-14 and start buzzing the tower without a few pointers. So here are a few key articles from our support site that should help you understand some of the finer points of streaming updates in TweetDeck.

Other than that, just strap yourself in and enjoy Twitter the way it was meant to be - in TweetDeck and in true real-time!

Not only very cool but *very important* too

Although bringing User Streams into the main app is, in itself, a very cool feature, there is also a very important change in v0.36 that makes this a vital upgrade for everyone.

Twitter is switching to a new way of assigning unique identifiers to each tweet in it’s database. This new method, dubbed “Snowflake”, has forced us to make some fundamental changes behind the scenes in TweetDeck.

The result of all this techno-jiggery-pokery is that you *must* update to at least v0.36 urgently. If you have not upgraded before 24th November then your TweetDeck will start going very wrong.

Oh, and one more thing…

Also in this build is a bit of very special TweetDeck magic….

We’re not letting on exactly what this magic does just yet, but we can tell you that it opens the door to some very exciting cross-platform TweetDeck communication.

Watch this space, Decksters. You’re going to love it!