If you’re like everyone at the Twitter office, you’re going crazy about the World Cup. When turning to Twitter to keep up with the current game, it helps to know where a Tweet is coming from—is that person watching the game on TV or is he actually in the stadium? To help answer that question, we’re excited to announce Twitter Places on twitter.com and mobile.twitter.com. Starting today, you can tag Tweets with specific places, including all World Cup stadiums in South Africa, and create new Twitter Places. You can also click a Twitter Place within a Tweet to see recent Tweets from a particular location. Try it out during the next match—you will be able to see Tweets coming from the stadium.
Several other features of this launch include: 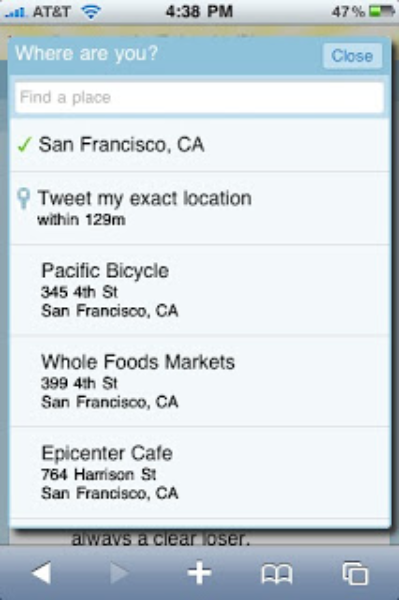 Over the next week, we will roll this out to users in 65 countries around the world, so keep an eye out for the “Add your location” link below the Tweet box. This is possible thanks to key data partnerships with TomTom and Localeze. We are also working to bring Twitter Places to our other mobile applications, including Twitter for iPhone, Android, and Blackberry. Follow @geo for geo-specific updates, and check our Help Center to learn how to use Twitter Places.