Our Android app set a new level for not just mobile Twitter apps, but Android apps in general. Still gaining great reviews, Android TweetDeck also defined a new era of TweetDeck design, form and function. For our brand new iPhone/iPad app, we have taken this level of quality and innovation and built in a whole bucketful of magic to create a TweetDeck app that will raise the bar for iOS apps just like we did for Android.

This totally new, fully iOS4-compatible TweetDeck app has been built completely from scratch. It is not only the most powerful and flexible mobile app we have ever produced, but also the most jaw-droppingly beautiful. This is the app your retina display has been crying out for. 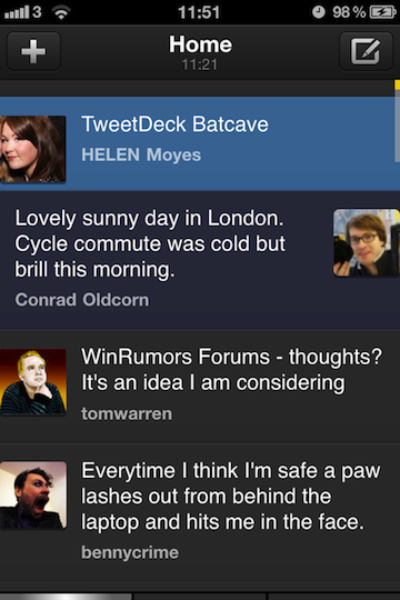 A major new feature of iOS TweetDeck will be totally flexible columns. You want to create a column blending your Mentions and some Twitter Lists? No problem! Always wanted to see your Facebook feed and Twitter DMs in a single column? We’ve got you covered! New iOS TweetDeck puts you in control of your columns, giving total flexibility over which feeds appear in which columns. Your social world has never been so personal.

We are currently doing a final round of testing with the app and we aim to be submitting it to the App Store in the next couple of weeks.(See UPDATE below). You can, however, get your hands on the app before anyone else if you are visiting this year’s SXSW. Just look out for Iain and Steve, who will be in Austin, and have 50 invites to give away allowing early access to the app via TestFlight. And not only that, but they will also be doling out TweetDeck gear in the form of exclusive T-shirts, stickers, badges, fluffy birds, and any other swag they can stuff in their luggage! We’ll announce more details about this soon.

So if you are a die-hard TweetDeck fan, patiently waiting for a new app, we thank you sincerely for your patience. The reward will be well worth the wait.

If you’re planning on being first in line to grab an iPad 2 and want a kick-ass app for your new kick-ass tablet, you know where to come.

Or maybe you are dissatisfied with your current app and want to search for something new.

Testing has taken us slightly longer than we thought (meaning you’re going to get an even better app!), but we will be submitting the app to Apple in the next few days. Thanks for your patience - the wait is nearly over :)

So, there were a few more issues that needed clearing up before we submitted, but finally we have done it. The app is now submitted to Apple and all is in their hands. Fingers crossed it all goes well!