Promoted Tweets allow brands to spread their message in ways that engage users and drive conversations about their products. Promoted Tweets are offered on a Cost-per-Engagement (CPE) basis, so you only pay when someone clicks, retweets, replies to, or favorites your Promoted Tweet. In addition, impressions on Retweets are free and can amplify the reach and cost-effectiveness of your campaign many times over.

While Promoted Tweets were initially only available in search, our plan for building a scalable ad product for marketers always included delivering relevant, engaging ads to users in their timelines.

(example of Promoted Tweets in search)

This past July, we began to put this plan into place by giving brands the option to start targeting Promoted Tweets to their followers, in addition to running in search results. Last month we further expanded this product and introduced the ability for advertisers to run Promoted Tweet campaigns that extend the reach of their messaging to non-followers in a targeted, relevant way. 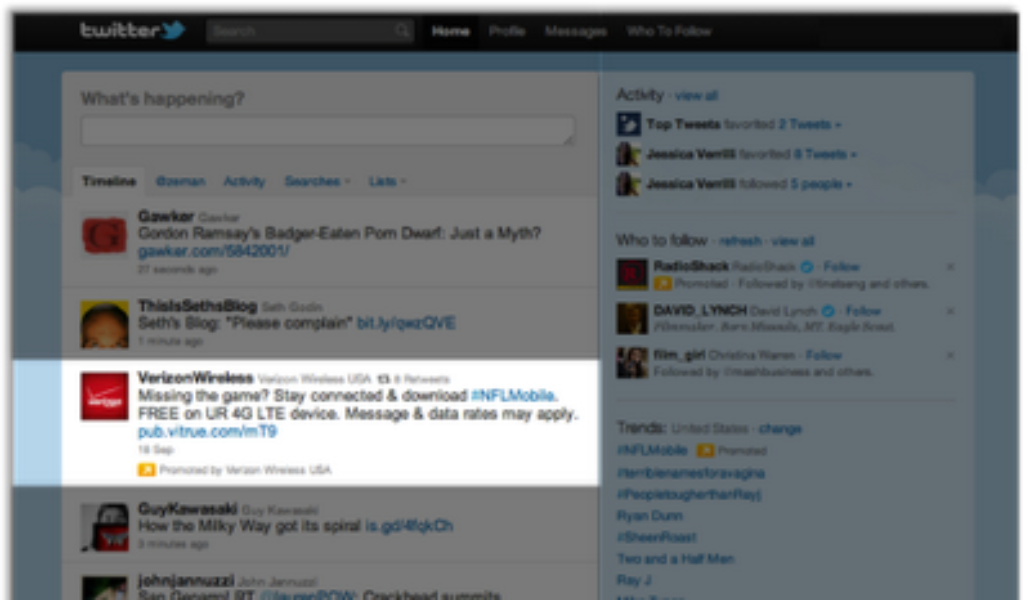 (example of Promoted Tweets in timelines)

Today, there are a variety of ways that Promoted Tweet campaigns can extend the reach of your message to the right person at the right time:

Promoted Tweets in search - Reach users who are searching for your brand or related topics. Your Tweet appears fixed at the top of the search results based on winning the auction for the search terms.

Promoted Tweets in timelines - Reach users who are likely to be interested in your message, at scale - including followers who might have missed your organic Tweets and/or users who share similar interests with your followers. Your Tweet appears at or near the top of the user’s timeline and scrolls down in the timeline like any other Tweet.

Geo-targeting - Reach users in the locations that are most relevant to your message. Promoted Tweets can be targeted to specific countries or to specific metro areas within the U.S.

As we noted in our very first blog post, on average, marketers have seen a 3-5% engagement rate for Promoted Tweets in search - an order of magnitude above most forms of digital advertising - and engagement has remained strong as we’ve begun testing Promoted Tweets in users’ timelines. Check back soon - we’ll be sharing those results here.