You all enjoyed the trailer, but now the year’s biggest blockbuster has arrived at last. iPhone TweetDeck v2.0 is here!

In Hollywood they would call it a “re-imagining” - keep the essence of the original, but bring it bang up to date with a new team, top-class effects and plenty of scope for sequels. Ditch the camp soundtrack and overacting of Batman and Robin, and replace it with the cool car and new suit of Batman Begins.

With the all-new iPhone TweetDeck, we have done just that. Our team took the original iPhone app and distilled the essence of what made it so popular into a series of guiding principles. They then embarked on creating a brand new app from scratch, making use of all the latest technologies and design approaches, but all the while with an eye on those fundamental principles from the original.

After several months of feverish work, locked in the lab at the Batcave for hours on end, a new app was born. Like the change from Michael Keaton to Christian Bale, the new app is faster, more powerful, more flexible and, lets be honest, far more sexy.

We have put a huge amount of work into creating an app that embodies everything that is good about TweetDeck. Every aspect has been designed to work beautifully, from the big things like the swiping between columns, the navigation through user profiles and easy-as-pie Add Column flow, to the little things like the Pull to Update animations and the slick Follow/Unfollow slider.

And not only is new iPhone TweetDeck more beautiful, it offers a new flexibility that has never been seen before. Making the “pinch” gesture on a column give you access to options that will allow you to add any combination of your feeds into a column. Twitter timelines, Mentions, DMs Favourites, Lists, Searches, Facebook feeds….all can be blended together into columns that suit you. The Caped Crusader never had anything as cool as this.

Throw in retina-quality graphics and multi-tasking support and you have an app that really is the start of something special.

And of course, the app is totally free, which means you won’t have to pull off any Joker-style bank raids in order to use it.

You can download the iPhone TweetDeck v2 from the AppStore here.

The old TweetDeck apps have been temporarily removed from the AppStore as iPhone TweetDeck v2.0 is a brand new app, not an update, and we want to avert any confusion. However, the old apps will be updated soon to include a splash-screen directing you to download the v2.0 app.

iPad users, don’t fret, your time will come! We are already working on optimising the new app for the iPad and we will be updating to a universal app in the next few weeks, once we have finished that work.

Don’t forget, this is only the start for our new app. We already have plans for point releases and will continue to update, fix and improve the app regularly. A key part of this process will be your feedback, which we always find hugely valuable. So please let us know what you think of the app, and alert us to any issues, via our dedicated Twitter account @iOSDeck.  We also have some support documentation here, which you might find useful to help you get started.

We hope you enjoy using this new generation iPhone TweetDeck. We really do feel it embodies the essence of what TweetDeck is, and look forward to being able to develop that further to bring you more features, more flexibility…and obviously more cowbell.

Here’s a summary of the great features in iPhone TweetDeck v2.0

The new iOS TweetDeck uses the same design themes and elements that were first introduced in our Android app, and followed through to or Chrome app too. 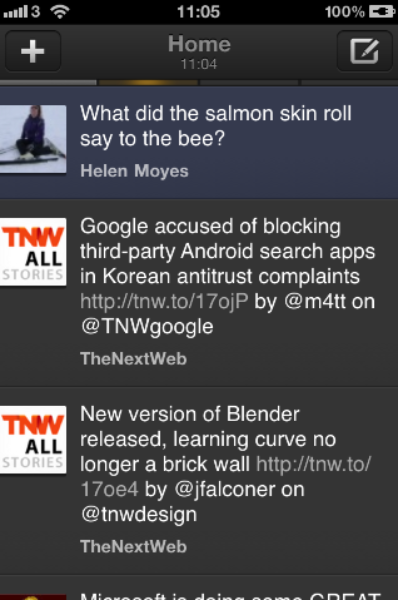 The app has been built to fully support the new features of iOS4, so you’ll find retina-quality visuals and multi-tasking support as standard.

Your Columns, your way

Of course all the standard twitter column types are available: Mentions, DMs, Lists etc. We have also brought combined columns to iOS, so you can add your Home, Me and Inbox columns to combine updates from all your accounts. But perhaps the most exciting column feature is that you can customise the feeds that appear in your columns as you wish.

In the Home, Me and Inbox pre-defined columns you can choose exactly which accounts will be used. In any other column, you can just mix and match feeds as you wish. So if you want to see DMs from one account, blended with your Facebook news feed, plus a couple of Twitter Lists, then you can do. Fancy blending a Twitter search, with your Mentions and Favourites? No problemo!

You really do have the power to create totally flexible columns to suit your own needs. And every column has infinite scrolling, so you can easily go back and catch up on what you missed. 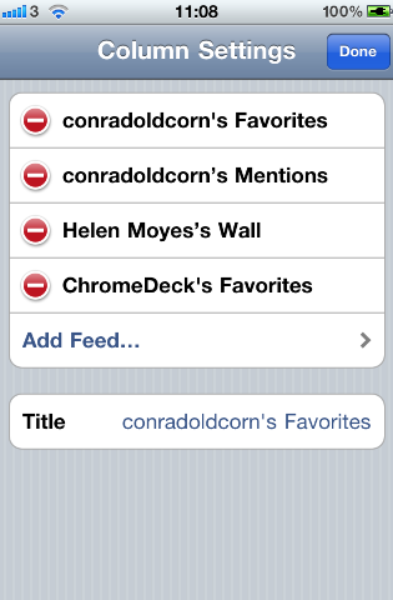 Long posts or short - it’s up to you

Thanks to built-in support for Deck.ly, you can send long updates easily. Don’t want to use Deck.ly? Just turn it off in the settings app 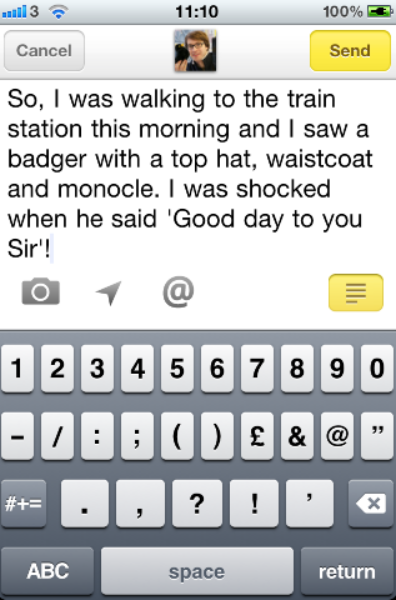 Get around with gestures

Pinch inward on a column to access column settings - for adding feeds, repositioning and deleting the column. Tap the status bar to jump to the top of the column. Pull a column down to refresh. 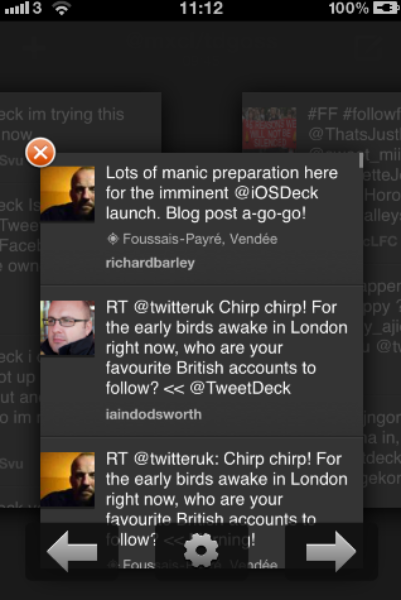 Explore Twitter profiles by swiping through feeds. Navigate through to tweet details, follow links, reach though to related profiles. Add any feed as a column with just one touch. 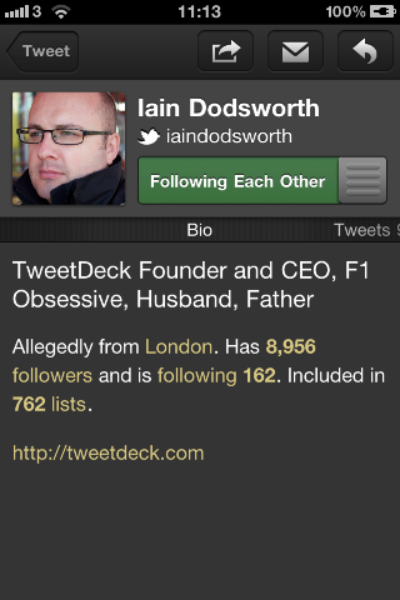 The tweet detail view shows the full conversation, including, by pulling down on a tweet, any subsequent additions to the thread. 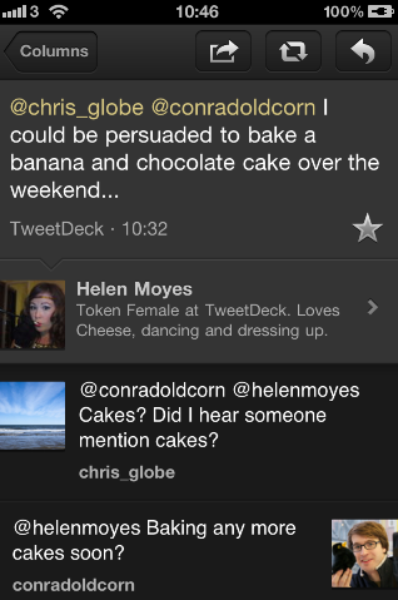 All the standard Twitter functions that you expect are there: retweets, both old and new, replies, direct messages, favourites. And of course Facebook likes, comments and wall posts are a breeze.

The clean, fresh compose window offers posting from multiple accounts, photo uploads, geotagging, URL shortening and username autocomplete. And, as we mentioned above, long posts of more than 140 characters are possible thanks to Deck.ly integration.

iOS TweetDeck v2.0 has been built from the ground up to be stable and reliable, with frameworks in place to allow us to easily integrate new server-side processes like column sync as they are developed.