A new barometer for the election

One glance at the numbers, and it’s easy to see why pundits are already calling 2012 “the Twitter election.” More Tweets are sent every two days today than had ever been sent prior to Election Day 2008 — and Election Day 2008’s Tweet volume represents only about six minutes of Tweets today.

All this explosive growth in conversation has fueled Twitter as a platform for civic debate and created a massive data set for analysis — data our Government & Politics team has used to study the State of the Union, a FOX News debate, Super Tuesday, gay marriage and other election-year topics. For the first time, it’s possible to measure conversations that just an election cycle ago were limited to coffee shops, dinner tables and water coolers.

Today, we’re launching the Twitter Political Index, a daily measurement of Twitter users’ feelings towards the candidates as expressed in nearly two million Tweets each week. 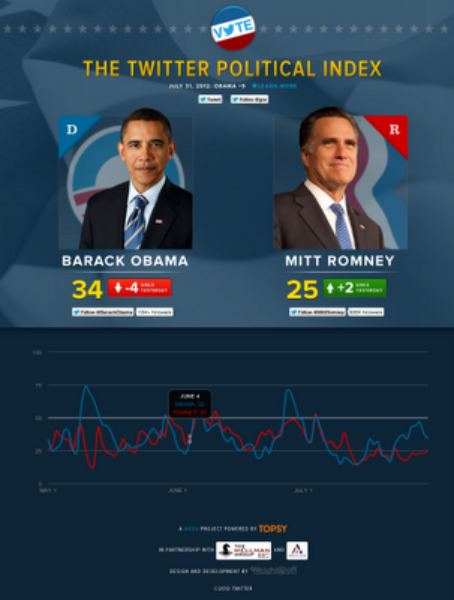 Each day, the Index evaluates and weighs the sentiment of Tweets mentioning Obama or Romney relative to the more than 400 million Tweets sent on all other topics. For example, a score of 73 for a candidate indicates that Tweets containing their name or account name are on average more positive than 73 percent of all Tweets.

Just as new technologies like radar and satellite joined the thermometer and barometer to give forecasters a more complete picture of the weather, so too can the Index join traditional methods like surveys and focus groups to tell a fuller story of political forecasts. It lends new insight into the feelings of the electorate, but is not intended to replace traditional polling — rather, it reinforces it.

For example, the trend in Twitter Political Index scores for President Obama over the last two years often parallel his approval ratings from Gallup, frequently even hinting at where the poll numbers are headed. But what’s more interesting are the periods when these data sets do not align, like when his daily scores following the raid that killed Osama bin Laden dropped off more quickly than his poll numbers, as the Twitter conversation returned to being more focused on economic issues. 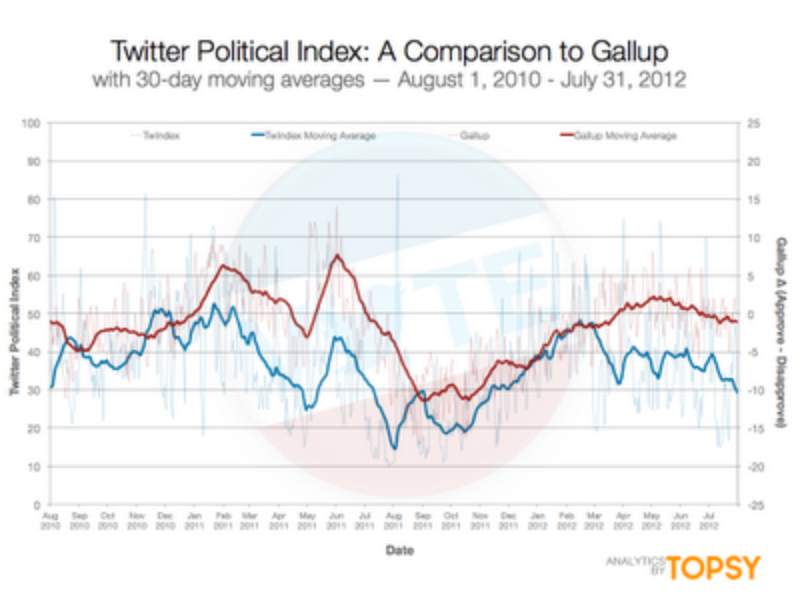 The Index for each candidate updates every day after 8 p.m. ET to reflect shifts in conversation from that day’s events, and is available along with a historical chart at election.twitter.com. During the runup to the election, our partners will be featuring this data on their sites as well: Topsy will be posting detailed analysis at www.topsylabs.com/election, and USA Today is using the Index to create the USA Today/Twitter election meter throughout the campaign. We’ll also tweet daily updates and other observations at @gov.