Over the past two weeks, many of television’s biggest stars live-tweeted the premiere episodes of their shows. And the fun’s not over yet! This week, several additional shows will feature live-tweeting casts… and we’ve even got a surprise up our sleeve.

To help you easily follow all this week’s small screen stars, we’ve created a one-stop-shop Get Started page for Fall TV: https://discover.twitter.com/falltv.html. 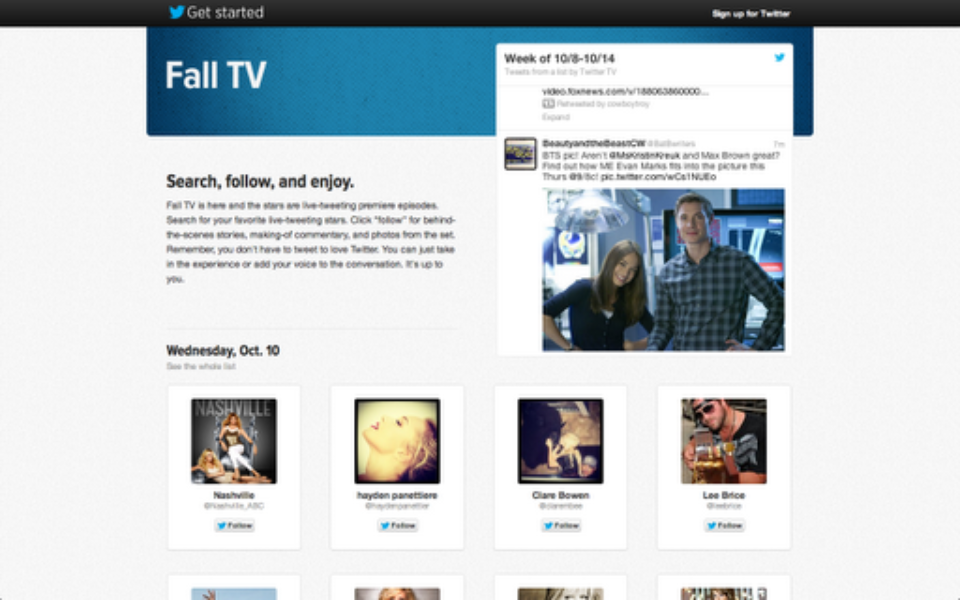 On Wednesday, the hotly anticipated country music drama Nashville (@Nashville_ABC) will be debuting on ABC. To celebrate the premiere, @TwitterTV has assembled a cast of country music performers and influencers to live-tweet and give fans the real insider scoop on all things country.

On Thursday, the new @CW_Network show Beauty and the Beast will also kick things off on Twitter,  as well as hit Vampire Diaries. On Sunday @Revenge fans can ask a cast member about the show’s twists and turns.

Here’s your full TV guide for this week:

Wednesday, 10/10:
ABC’s Nashville: @Nashville_ABC | #NashvilleABC (series premiere)
Cast members Hayden Panettierre (@haydenpanettier) and Clare Bowen (@clarembee) are both live-tweeting, 10 PM EST / 9 PM CST alongside a live-tweeting cast of country influencers we pulled together, who are sure to have insights on many aspects of the show and the characters:

@leebrice: Musician; he has also co-written singles for Garth Brooks, Adam Gregory, Eli Young Band and Tim McGraw. His latest song “Hard to Love” is #6 on the Billboard Top 100 (Country).

@cowboytroy: Musician Troy Lee Coleman III, who performed on this past season’s Dancing With The Stars finale (May 2012).

@gwensebastian: Musician discovered on NBC’s The Voice; currently on tour with Blake Shelton.

@jamieoneal: A powerhouse in Nashville, she recently started a new label working with young female musicians, producing/managing them and helping them navigate the industry.

@rachelelynae: Jamie’s flagship artist. Has a current hit on the radio called “Party ‘til the Cows Come Home.”

@JessicaNorthey: Creator/founder of Country Music Chat (#CMChat) on Twitter and blogger for the web’s largest music and radio community AllAccess.com.

@joebonsall: Musician; a member of the Oak Ridge Boys.

Finally, be sure to check back on Wednesday for a mid-week surprise about one of TV’s biggest (and funniest) shows!