It has been nearly two years since we introduced Promoted Tweets, the first in our suite of Promoted Products. In that time, people around the world have increasingly accessed Twitter from a mobile device. Today, we are taking an important next step in making our Promoted Products available to those users.

To date, mobile users may have seen Promoted Products in the following ways:

With our most recent app updates, Promoted Accounts are now in Twitter for iPhone and Twitter for Android. And in the coming weeks, we’ll begin introducing Promoted Tweets in the timeline on these mobile apps. Initially, a small number of users may see Promoted Tweets near the top of their timelines from brands they already follow. This will help ensure that people see important Tweets from the brands they care about.

For both products, the experience will be the same as on Twitter.com:

We’ve had a simple philosophy since we first launched ads on Twitter, and it’s this: We strive to create products that put users first, and continue to enrich your Twitter experience. Today’s news represents another important step in our advertising efforts, and we hope you like it. 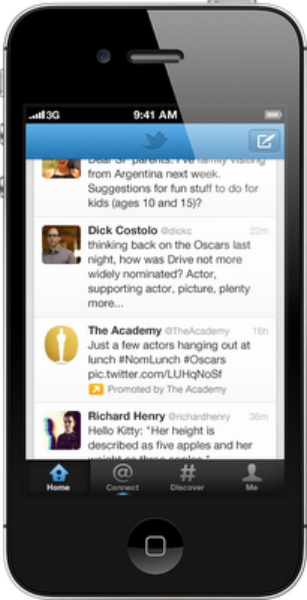