With delegates from 10 states up for grabs, Super Tuesday has been a highly anticipated day on the path to the Republican nomination. This chart maps the conversation about each of the candidates over the course of the day. You can see the volume of Tweets increase sharply around the time the first results were reported, and additional lifts as each candidate addressed citizens and voters on TV. 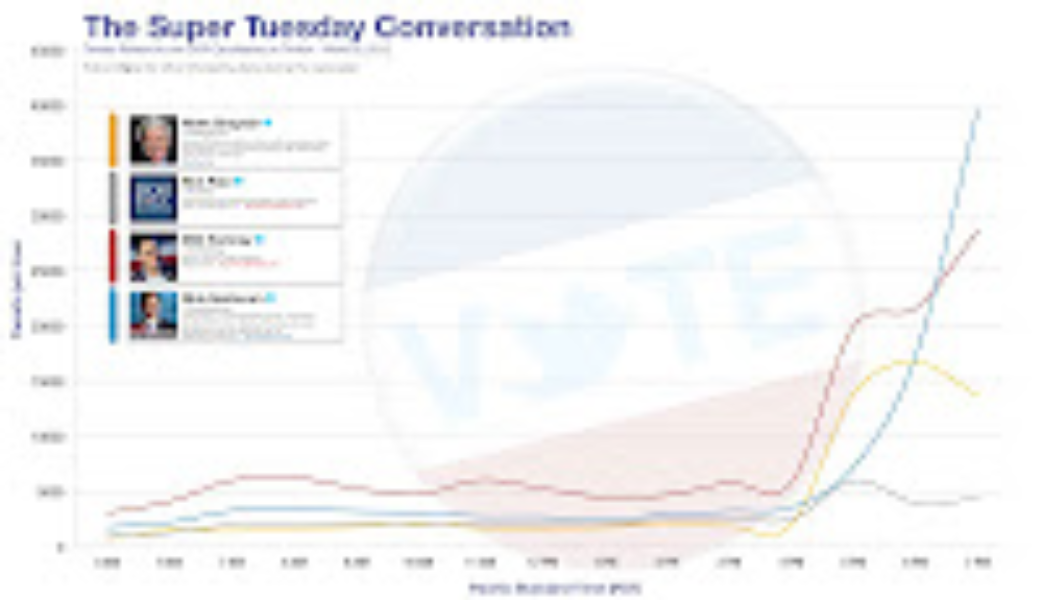 The data surprise of the night? With an unexpectedly tight race in Ohio between @RickSantorum and @MittRomney, the conversation on Twitter about Santorum spiked far higher than any of the other candidates. In just the hour between 6pm and 7pm PT, there were nearly 40,000 Tweets referencing Rick Santorum. In fact, this is a new 2012 Election Twitter record. Our previous highest candidate spike belonged to Newt Gingrich, on the day he won the South Carolina Primary.

The data tells one part of the of the story, the Tweets tell another. Throughout the day, most of the top retweeted Super Tuesday Tweets were the funny ones. Note: The “Rmoney” photo is actually an image that was circulated in February, and has been confirmed to be a Photoshopped image, not a photograph.

You know that warm, tingly feeling you get when your foot falls asleep? That’s how I feel about Mitt.

The #Romney family misspells its own name in the world’s most epic Freudian slip. twitter.com/alexqgb/status…

Poll: 63% Of Americans Say They Have A Problem With A Mormon President Who Is Also Mitt Romney onion.com/yjudnl

As the results began to come in, political reporters and political junkies alike were glued to their televisions—and sharing their insights on Twitter.

Santorum email to supporters: “We have the momentum now let’s take advantage of it.

On FNC, @sarahpalinusa takeaway on Super Tuesday: “It’s not all about money.”

If Santo wins Ohio, the one thing he’ll really want and need is another debate. The last one wasn’t so good for him.

Finally, here’s our earlier blog post with charts that show the road to #SuperTuesday on Twitter in Tweets that mention candidates and candidate follower growth.