Update: We’ve added two screenshots below for those of you who want the front page artwork for web and mobile versions.

Every day, we’re amazed and humbled by the many ways in which people use Twitter, which range from simply retweeting to igniting conversations with hashtags (even around lesser-known topics) to sharing spectacular and far-flung views. In 2012, everyone on Twitter brought us closer to moments and places that used to be far away or inaccessible: A Tweet from the bottom of the ocean. Tweets from Mars. An extraordinary view from space of Superstorm Sandy. A quiet backstage moment with a presidential candidate. All of these and millions of other such moments were ours to experience directly wherever we were, in the midst of work or play or travel.

During big sporting events, fans were the roar of the crowd, tweeting their team passions. Commentators and armchair pundits alike took to Twitter to share their opinions, arguments and reactions throughout the campaigns, conventions, debates and on Election Day. Millions of music fans flocked to Twitter during the MTV Video Music Awards to tweet about the performances and react to winners and losers that night.

You can explore and discover all of these moments and people who made this year on Twitter unique at 2012.twitter.com, and you’ll have the same immersive experience on your mobile device. We’ve taken a look back at the Tweets of 2012 and use both data and editorial signals to showcase some of these moments and conversations around several themes:

We’ve also partnered with Vizify so you can find out about your year on Twitter. Try it here.

Finally, our heartfelt thanks go to each and every one of you for making Twitter as compelling as it is. It’s all about you. 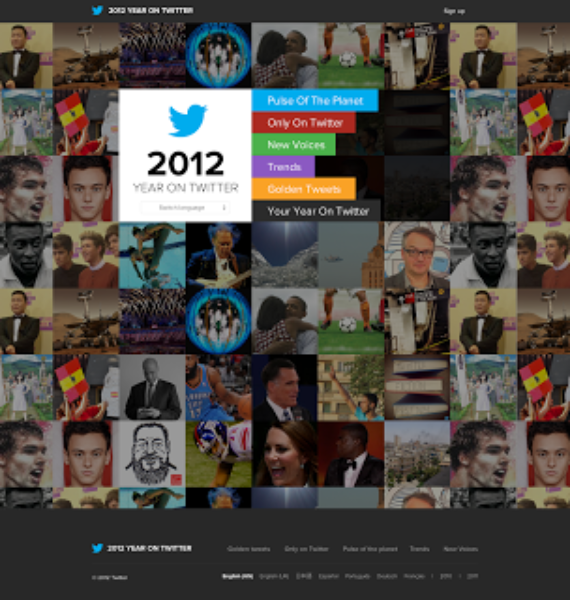 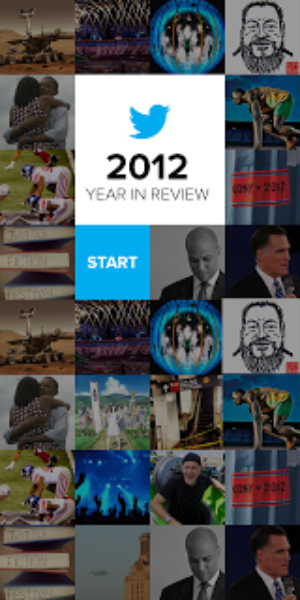