Did you know the first brand on Twitter was a retailer?

My favorite denim company, @earnestsewn (which I wear everyday), was the first commercial account on Twitter. I created it and emailed them.

Today, thousands of retailers use Twitter to connect with customers - from small businesses like Alter Brooklyn (@ALTERBrooklyn) to global brands like Nike (@Nike). With the holiday shopping season around the corner, we partnered with Compete (@Compete) to look at how these Tweets influence the U.S. shoppers who see them. The “Tweets in Action: Retail” study found that people who see Tweets from retailers are more likely to visit retail websites and make online purchases. And the more Tweets they see, the more likely they are to buy.

The study analyzed over 7,600 users and their site visitation and purchase behavior on over 700 retail brand websites during the busy back to school season. The first group of users was composed of people exposed to at least one Tweet by a retail company. There were two additional control groups: one was made up of U.S. internet users who visited Twitter but were not exposed to retailer Tweets and the second represented the average internet browser.

The key findings on visits, online purchases and Tweet frequency

Compete found that Twitter users visit retail websites at a higher rate (95%) than general internet users (90%). This finding is true for both mass retail sites as well as specific categories like apparel & accessories retailers and becomes even more pronounced for more niche parts of the retail industry like toys or sporting goods. 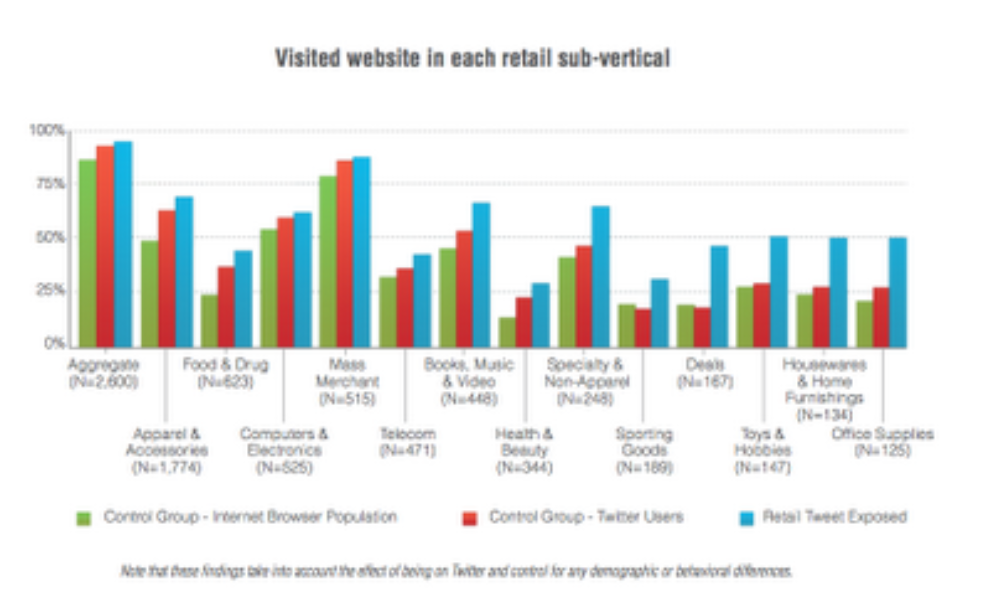 Key takeaway: Twitter users are big online buyers but big brands aren’t the only retailers that benefit. Twitter brings people closer to a wide range of interests so niche retailers who connect with the highly engaged audience on Twitter often see a greater lift in results.

During the timeframe that Compete analyzed, 27% of general internet users bought something from a retail website. Twitter users, however, made purchases at a rate of 33% from the same sites during the same period. When Twitter users were exposed to a Tweet from a retailer, that purchase rate increased to 39%. This represents a lift of 1. 4X and 1.2X, respectively, and is true across a variety of retail categories. 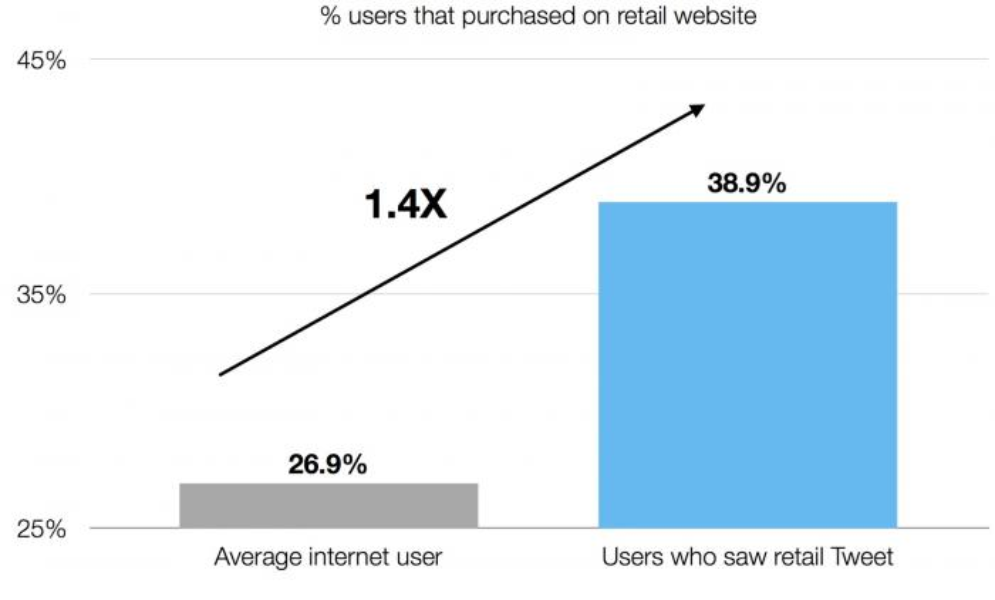 Key takeaway: People who see a retailer’s Tweets are even more likely to make an online retail purchase than they are to visit retailer websites. This means Twitter users arrive on a retail website with a higher intent to buy. Make it easy for them. Include links in Tweets that streamline the path to purchase and special offers that incentivize taking action.

As people are exposed to more retailer Tweets, the likelihood that they will visit a retail website and make online purchases grows. Twitter users exposed to Tweets from retailers on 12 or more days were 32% more likely to purchase from those retailers compared to all users exposed to retail Tweets.

Key takeaway: The frequency of your Tweets matters but so does the quality. Start by sharing relevant, timely messages that Twitter users will find valuable. Then, test and experiment to find the frequency “Tweetspot” with your audience.