By
Friday, 18 May 2012
Link copied successfully

With Internet Week wrapping up in New York City today and the TV upfronts in full swing, what better time to share that Twitter and ESPN are teaming up. Earlier this week, we announced a strategic partnership with ESPN that offers fans and advertisers a unique, interactive way to integrate broadcast TV with online social conversations around major sports events. This relationship marks the first time Twitter has partnered with a network to create custom sponsorship packages.

Now, marketers will be able to make a single investment to reach consumers on-air and online, across ESPN networks, ABC, ESPN.com, ESPN Mobile and Twitter during marquee sports events. The first program that ESPN and Twitter have co-created, GameFace, will kick off during the NBA Finals. This first effort, which will be integrated throughout live TV broadcasts with a dedicated Twitter hashtag, #GameFace, encourages fans to tweet photographs of their “game face” throughout the finals. At the end of every game, the best photographs will be featured on-air as well as online in a photo gallery on ESPN.com/NBA and tweeted via The NBA on ESPN (@ESPNNBA). After the NBA Finals, ESPN will select the favorite photo and the winning Twitter user will receive a grand tour of ESPN headquarters. 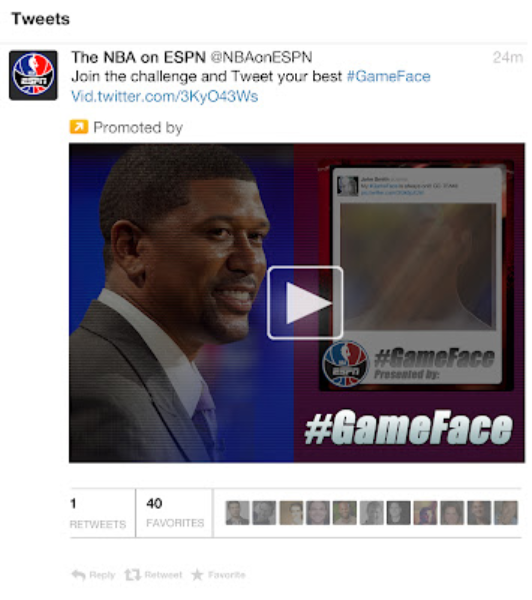 Twitter and ESPN will create additional programs around fan favorite events like the Global X Games, Road to the BCS National Championship, NFL Monday Night Football, the World Series, and NCAA Men’s Basketball Tournament. Every event collaboration will offer marketers an interactive experience that engages the audience around ESPN’s premier content across screens and drives the sports conversation on Twitter through dedicated hashtags.

This program was developed by Twitter’s Brand Strategy team in collaboration with ESPN. The Brand Strategy team focuses on partnering with large brand advertisers on creative custom packages that make the most of the Twitter platform. This year, the team worked with American Express on the launch of Twitter’s advertising offering for small businesses, as well as the launch of the AmEx Sync program in March.