It’s been a March of “Madness” on Twitter as NCAA fans shared brackets, cheered for their teams and taunted the competition. We’ve been watching closely to pull together a picture of the Twitter conversation around the NCAA post-season.

In the end, it came down to Kansas versus Kentucky at the New Orleans Superdome. Despite a Kansas rally in the last four minutes, Kentucky commanded the game from the start. The big story on Twitter was freshman Anthony Davis’ ability to dominate the game while scoring just six points:

Anthony Davis hasn’t made a field goal and he has had an immense impact on this game.

Just as at the Superdome, Kentucky controlled the conversation on Twitter, sustaining a higher Tweets-per-minute (TPM) rate than Kansas throughout the game. The conversation peaked at the end, when Tweets about the Championship exceeded 30,000 TPM.

Before the final game, the tournament buzz peaked on March 25th, when Kansas and the University of Kentucky advanced to the Final Four and helped inspire more than a million Tweets in the process: 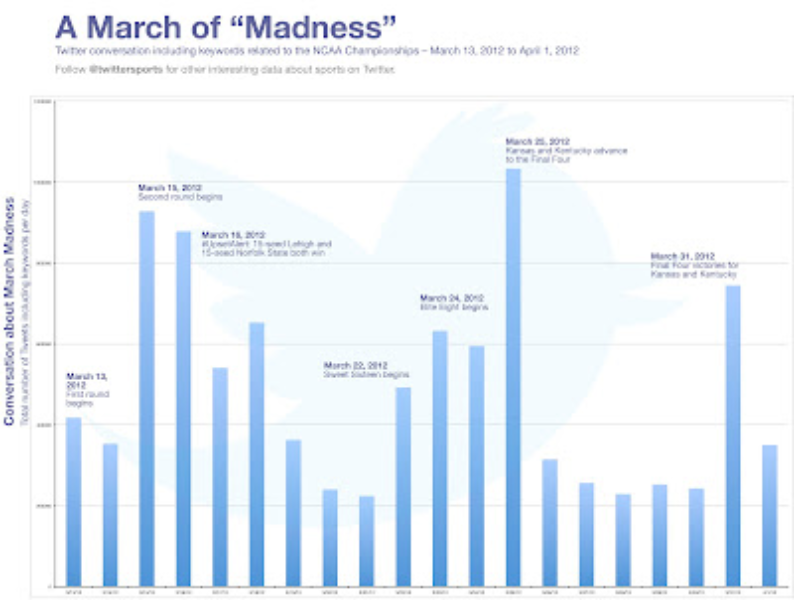 Last month, the conversation started, as it always does, with the brackets. And what better place to share your completed bracket than Twitter? Across sports, stars shared their brackets with an account called @TheLockerRoom

Speaking of the Devil..check out @kevinlove Should be some good competition #BRACKETOLOGY twitter.com/TheLockerRoom/…

Of course, March Madness went viral far beyond the sports arena: members of Congress got in on the predictions as well.

Here’s my #MarchMadness bracket - yep, like many I made my picks before the Fab Melo/Syracuse news! countryfirstpac.com/about/picks.as…

As the tournament progressed, the turning point for one favored team came when UNC’s Kendall Murphy broke his wrist. Fans across the country showed their support by marking their own wrists with the number 5.