With the football season coming to an end, our favorite television shows are retiring their reruns and touting brand new episodes with climactic plot lines — just in time for February sweeps.

Weeks before these new episodes air, promotional activities kick into high gear. In addition to television commercials and online display and video ads, now more than ever, TV networks are using social media in the hours leading up to an episode to drive tune-in. Last year during the November sweeps period*, CBS held a “social sweeps week”, where stars took over their show’s corporate social accounts on the day of their new episodes.

Several programs used Promoted Tweets to help drive tune-in, including Unforgettable, which airs on Tuesdays at 10/9c and stars Poppy Montgomery as a detective with an uncanny memory. Montgomery took over the @un4gettableCBS Twitter account and throughout the day, tweeted behind the scenes pictures and sneak peeks of that night’s new episode. @un4gettableCBS ran a Twitter campaign and targeted Promoted Tweets to users who were similar to its followers to bring in new viewers and increase engagement with existing fans.

Manicures/pedicures are for wimps. My friend Alex gave me a new tat on break! -Poppy #Unforgettable twitter.com/un4gettableCBS…

Some of the most effective Tweets pique an audience’s curiosity, use a call-to-action or include a link or photo. @un4gettableCBS used these best practices to extend the show’s content to a broader audience and Twitter users responded — a tweeted photo of Montgomery getting a tattoo during a filming break had a 5.4% engagement rate. Another Tweet with a teaser photo of one of the characters acting hurt had a 4.3% engagement rate.

Lift in Tweets in hours leading up to the episode
The graph below illustrates that in the hours leading up to the show, anticipatory Tweets steadily increased and then peaked when the program aired at 10/9c. These are key hours in which Tweets can be promoted to further amplify conversations. In fact, on the day @un4gettableCBS ran the Promoted Tweet, there was a marked lift in conversations leading up to the airing — nearly a 48% increase in volume over the day of the previous week’s airing, when the show did not promote any Tweets. The week after the campaign ran, mentions returned to a similar but slightly higher level than the week before the campaign ran (4% higher than the first week). 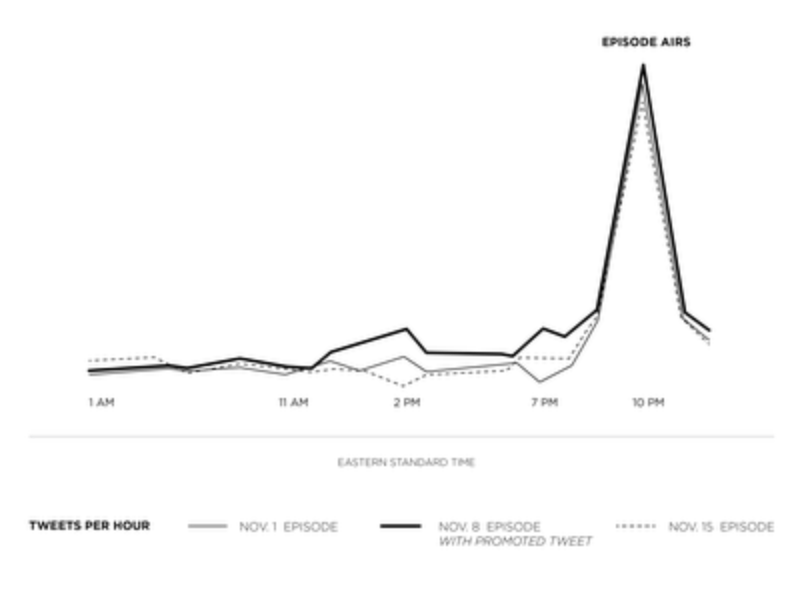 New followers
Promoted Tweets helped increase conversations but they also helped grow the account’s follower base. @un4gettableCBS gained nearly three times the number of followers during the week in which they ran Promoted Tweets (compared to the previous and subsequent weeks). This halo affect of additional earned followers from Promoted Tweets is a valuable benefit that can expand a show’s social presence for future engagement and promotions.

Tweet activity can reflect tune-in
When it comes to marketing TV programs via Twitter, driving viewership is what counts. The ratings results give us directional information about the relationship between Twitter activity and tune-in — about 380,000 more viewers tuned in to the show when the Promoted Tweets ran compared to the previous week when the campaign didn’t run. Like Tweet mentions, the week after the campaign, viewership returned to about the same level as the first week, although marginally higher.

The takeaway
Use Promoted Tweets with teasers and behind the scenes content on the day of an episode to remind users to tune in. Even with a relatively small Promoted Tweets campaign, Unforgettable’s Twitter mentions increased nearly 48% in the hours leading up to the show and an added bonus was the three-fold increase in new followers. The week after the campaign, viewership and Twitter mentions were slightly higher than the first week’s — in what is perhaps a sustained effect from the previous week’s campaign. A larger Twitter integration or campaign can magnify the results — for example, see how MTV leveraged Twitter for its Video Music Awards to drive its largest viewership ever.

Find out more about Promoted Tweets and tweeting for TV.

*Note: CBS featured all new Unforgettable episodes during this period