Amplifiers study: The Twitter users who are most likely to retweet and how to engage them

Platforms like Twitter have redefined the relationship between advertisers and their audiences. Today, anyone on Twitter can engage a brand in real-time conversations and even help spread a brand’s messages. In fact, with every reply, favorite or Retweet, Twitter users drive earned media for businesses that can make a big impact on ROI over time.

The findings are based on data from surveys fielded in the United States during 2012. Twitter and Compete worked together to build a questionnaire that asked respondents about their propensity to use Twitter and other services as well as the when, where, how and why of their usage patterns. Compete interviewed 655 Internet users in the U.S. for this study.

Our research found that the type of U.S. Twitter user who is most likely to retweet isn’t too different demographically from the rest of people on Twitter. Amplifiers are evenly spread across age groups, income levels and geographic locations of users on Twitter. Gender doesn’t make a statistically significant difference either.

Tips for advertisers: When you create campaigns on Twitter, don’t limit your potential earned media. Amplifiers will exist across all your potential audiences. Target broadly across demographic categories.

2. Amplifiers are heavy Twitter users who are on the go.

Tips for advertisers: Maximize the engagement of your Twitter campaigns by targeting users on mobile devices and increasing the likelihood that you reach these amplifiers. Tweet content that is easy to consume and share on the go. Test day parting your Tweets to better understand when your followers are most inclined to retweet. 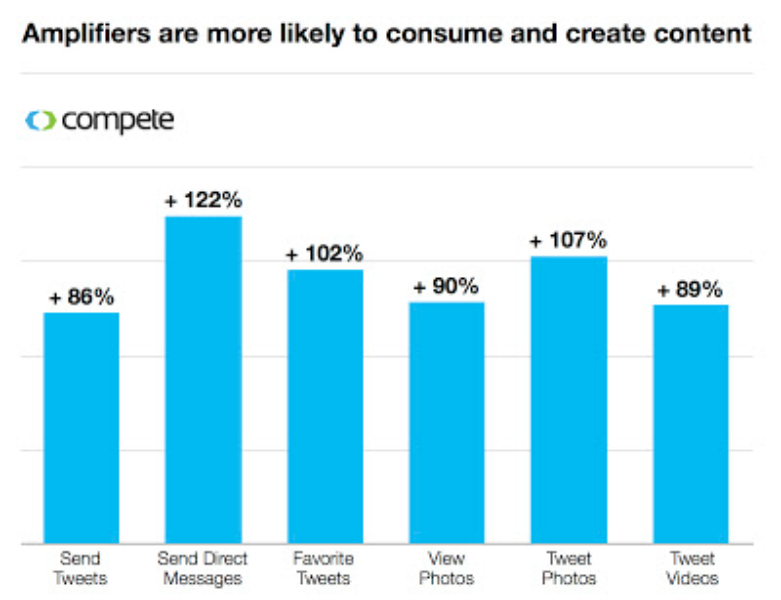 Tips for advertisers: Make your Tweets resonate with visually-fluent amplifiers. Consistently include engaging images or videos in your Tweets. Don’t forget to respond to relevant Tweets from followers to show you are engaged with the real-time content they create.

Tips for advertisers: Amplifiers are likely to be following your brand already. Keep them engaged by sharing the kind of content they want. Here are the top reasons people told Compete that they follow brands on Twitter:

According to Bluefin Labs, 95% of the public social conversation around TV happens on Twitter. Twitter users love to tweet about what they are watching on television and this is particularly true for amplifiers. Our study found that 90% of amplifiers tweet about TV shows. They are also 36% more likely to be in front of the TV whenever they tweet.

Tips for advertisers: Closely integrate your TV campaigns with Twitter. Include hashtags in your TV ads. Share links to your ads on Twitter. With Twitter Ads, brands can also target users who are interested in specific TV shows and reach more users with more relevant messages.