In 2010, we launched Promoted Accounts to help users discover businesses and people of interest, and to help advertisers build a highly engaged audience of Twitter followers. A study from earlier this year shows that users and businesses benefit from connecting on Twitter - in fact, 72% of the research participants said that they were more likely to make a future purchase from brands they follow or engage with on Twitter.

To help make it even easier for users and businesses to connect, we’ve been running a test that displays account recommendations on iOS and Android devices. These recommendations leverage Tweets as a call to action and display natively in the home timeline. For example, a new coffee shop could run a geo-targeted Promoted Accounts campaign in timeline to build awareness about their business and explain why users should follow them on Twitter.

After a successful test with a number of advertisers, we are excited to expand this beta to all advertisers globally starting today. This option is available in addition to the existing Promoted Accounts format that runs within the Who to Follow section. 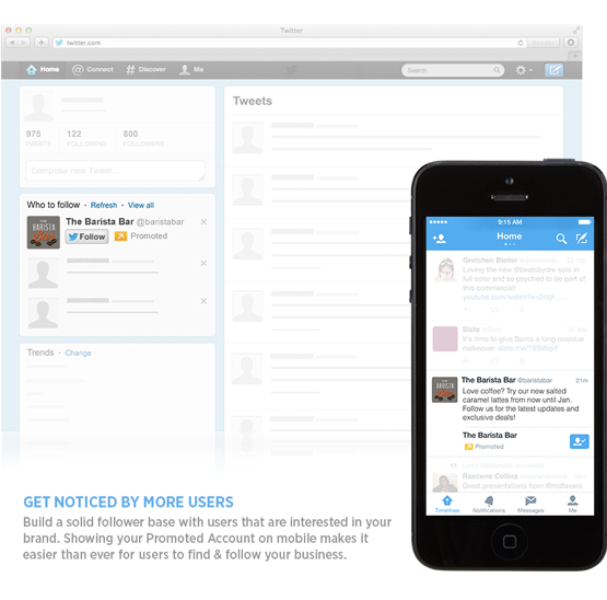 As always, if you are an advertiser running a Promoted Account campaign, you will only be charged when a user follows your account.

Our hope is this enhancement to Promoted Accounts will make it easier for businesses to connect with the 76% of our users who access Twitter on their mobile device, and help users connect with the brands they care most about.