Back to school: Three tips for engaging shoppers

It’s no secret that throughout the year millions of parents, educators, teens and influencers turn to Twitter to connect with their interests in real time.

And now that schools are out for the summer, it’s not too early to start planning how you’ll engage Twitter users around the back to school season. Over the past few years, we’ve seen that Tweets about back to school shopping tend to spike around Labor Day, but our internal data indicates there’s a longer conversation cycle around seasonal shopping that can start as early as July. 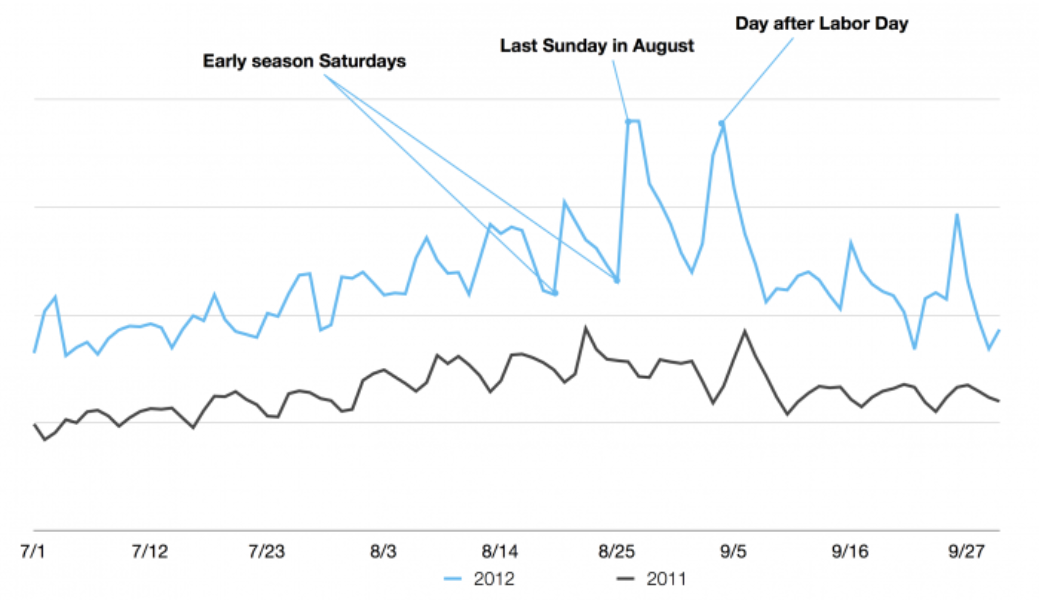 In fact, savvy brands on Twitter treat back to school to spark conversations that can keep shoppers engaged well into the holidays. Here are three tips to create ongoing engagement with Twitter users through the end of the year:

Lay the groundwork now to ensure a successful second half of 2013. Start by extending your reach on Twitter with Promoted Accounts. Grow your followers now so that your brand can head into competitive shopping moments like back to school, Halloween, Black Friday, Cyber Monday and the holidays with as broad and engaged an audience as possible.

Then, build buzz with Promoted Tweets. Share limited-time offers and helpful content with shoppers. Give them incentives to engage and drive earned media with contests or giveaways. For example, last July @Staples launched a #BackToSavings promotion aimed at early-bird shoppers. The retailer highlighted discounts on school supplies through late August and encouraged Twitter users to tweet with the special hashtag to be entered to win a laptop.

It’s the most wonderful time of the yr. Make it even better by entering to win an HP laptop #BackToSavings http://t.co/5O94T7jy

Back to school shopping tends to sneak up on busy parents. According to Crimson Hexagon (@CrimsonHexagon), 40% of social media conversations in 2012 around back to school concerned the rush to finish shopping. Use Twitter to help frazzled shoppers make the best decisions on the go.

Share useful content in your Tweets like detailed shopping lists. Embed rich media like video reviews of the season’s most popular products or trends. Place your brand at the center of the back to school conversation on Twitter with a Promoted Trend. And capitalize on real-time intent by targeting your Promoted Tweets to relevant keywords in timelines and in search.

Don’t forget about mobile targeting to connect with shoppers wherever they might be. Include links that streamline the purchase process for every device. Since Twitter users are very mobile, content and promotions that apply online and in-store will appeal to the most users.

Dorm Essentials: check! Now move on to the fun stuff & personalize your space with great accessories that show off YOU! http://t.co/JZtk2h4k

Tip #3: Build momentum into the holidays.

Once school starts, you can continue the conversation with shoppers. After all, customers who’ve had a good experience with you during the back to school season are likely to be interested in your future offers. Try our new Lead Generation Cards to encourage Twitter users to sign up for your emails. Another great way to keep shoppers engaged: Spotlight your loyalty program and the benefits of becoming a repeat customer. Some big brands like @BestBuy even create separate Twitter accounts to feature exclusive deals for loyal customers.

Save 15% on iTunes cards! Offer valid for @RewardZone members; online only. http://t.co/4xZsNLxJ #deal

Bottom line: Don’t treat back to school as a one-off campaign, but as the beginning of an ongoing conversation with shoppers around their real-time needs. Use Twitter to build a relationship with shoppers over time. Focus on sharing valuable offers and useful content that connects your brand with the right shoppers at the right time and in the right context.