It’s critical for advertisers with direct response objectives to be able to understand the impact of Twitter ads on their bottom line. With that in mind, we’re announcing the general availability of conversion tracking, a measurement and reporting tool which will help advertisers understand the full conversion impact of impressions and engagements from Promoted Tweets so they can properly optimize their campaigns. Conversion tracking is available to all advertisers starting today.

How does this work?
Let’s say a shoe retailer wants to measure how a specific Promoted Tweet campaign drove purchases on their website. Using conversion tracking, the retailer would create a “purchase” conversion tag and place it on their purchase confirmation page. When a user reaches that page, the tag reports to Twitter that a purchase event has occurred. Twitter then matches that event against the set of users who have viewed or engaged with any valid Promoted Tweet campaign. Campaign analytics report the total number of users that converted and cost per action (CPA) without identifying who viewed or engaged with the Promoted Tweet, allowing the advertiser to focus on the campaigns that are driving the most cost-effective purchases. 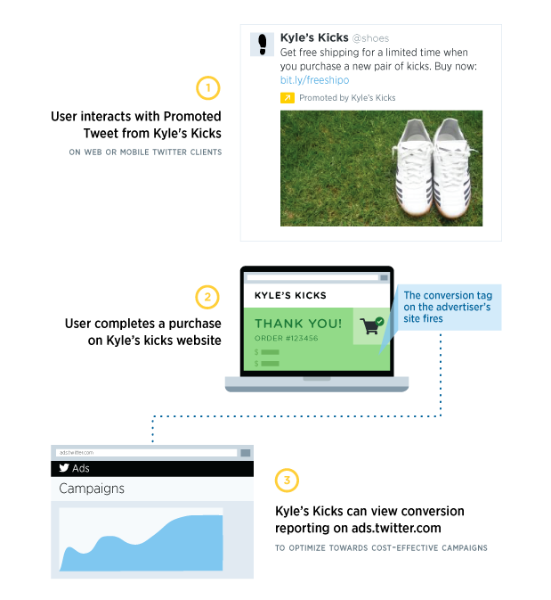 A key benefit of conversion tracking is that it gives you a full view of conversion attribution, how Twitter-specific engagements and impressions lead to conversions. An attribution window is the maximum time window to credit Twitter between when a Promoted Tweet interaction happens and a conversion event occurs on your website. Attribution windows can be set separately for both post-engagement and post-view conversions. Post-engagement conversion includes not only attribution to URL clicks, which many other platforms offer, but also Tweet expands, Retweets, replies, favorites, or follows that a user performs on a Promoted Tweet before converting. Post-view conversion accounts for when a user simply views an ad and later converts on your website.

Live Nation, a live entertainment and eCommerce company, also used conversion tracking during the beta. “Twitter’s conversion tracking for websites has given us the measurement and reporting tools to successfully drive ticket purchases for some of our highest profile music concerts. During the beta test, our campaigns met or were below our target CPA per ticket sale, and we can’t wait to promote additional concerts with Twitter,” said Ryan Okum, SVP of Social Media at Live Nation.

We’re excited about the possibilities that conversion tracking will open up for marketers looking to measure the ROI of their Twitter ad spend.

Interested in using conversion tracking? Head over to ads.twitter.com to get started.