How the world experiences TV has fundamentally changed. We no longer watch TV as a silent participant, rather as an active voice, sharing the experience as events unfold with people across the globe. Last year, 32 million people in the U.S. tweeted about TV programming: big events, like the Super Bowl (24 million Tweets) or their favorite weekly series, like American Idol (5.8 million Tweets during 2012). People tweet so much about TV that Twitter is becoming a fundamental part of how TV is measured.

With this shift in our sights, we’re announcing the availability of TV ad targeting on Twitter.

TV ad targeting was developed over time through the acquisition of Bluefin Labs and is designed to make it even easier to extend and enhance TV ad campaigns. TV ad targeting for Promoted Tweets is available today in a limited beta to selected partners running national TV commercials in the U.S.

TV ad targeting enables marketers to engage directly with people on Twitter who have been exposed to their ads on TV. Synchronized Twitter and TV ad campaigns make brand messages more engaging, interactive and measurable, while making it easy for marketers to run always-on Twitter campaigns that complement and amplify their TV creative.

To help facilitate a coordinated, multi-screen effort, we’re giving advertisers a new TV Ads dashboard, which shows when that specific brand’s TV ads have aired. This will help digital teams align not only with what’s shown on TV and when, but give insight into how Promoted Tweets can be crafted in the most effective ways to build upon broader marketing themes. 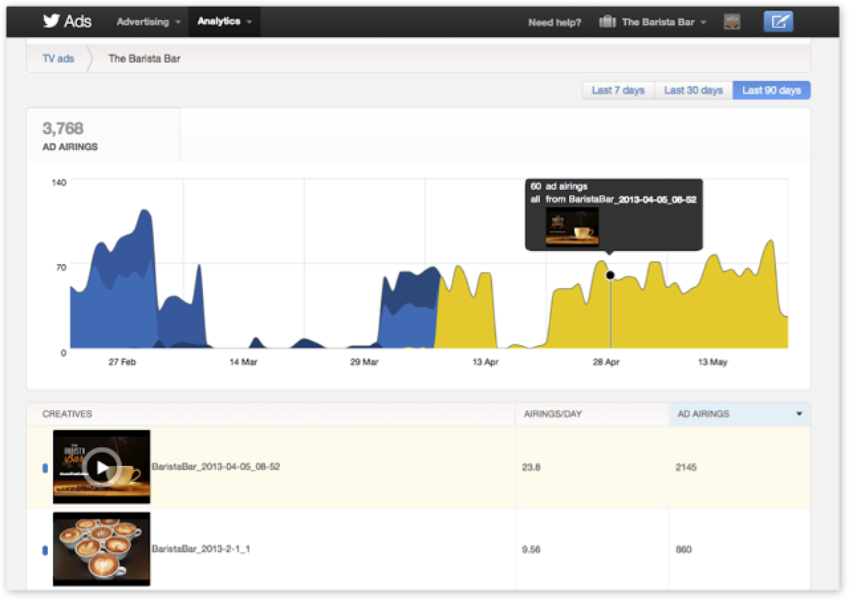 TV ad targeting works by using video fingerprinting technology to automatically detect when and where a brand’s commercials are running on TV, without requiring that advertiser to do any manual tracking or upload media plan details. Whenever a commercial airs during a TV show, Twitter not only determines where and when it ran, but can identify users on Twitter who tweeted about the program where the ad aired during that program. We believe a user engaged enough with a TV show to tweet about it very likely saw the commercials as well.

As brands look to find better ways to coordinate their marketing activities, Twitter provides the perfect bridge between TV, digital and mobile. In fact, 64 percent of mobile centric users on Twitter use it in front of the TV at home. Twitter lets brands continue the conversations they start with their TV advertising by building on the awareness they generate through TV with the interactivity and engagement of Twitter’s social/mobile DNA.

TV ad targeting is currently available in beta for the U.S. market only, and only for customers running U.S. national TV ad campaigns, and have had previous experience running ads on Twitter.  For more information about how to be part of the beta, please contact your account manager.