From the great brine debate to six-second recipes, fans of the Food Network (@FoodNetwork) drove the conversation on Twitter around its November 23 Thanksgiving special.

Fans sent a total of 14,194 Tweets about the “Thanksgiving Live” episode, which SocialGuide reports were seen by 1.5 million people. This was due to several Twitter integrations including live-tweeting by the chefs, polls during the show, and several calls to action. The Food Network also had its biggest bump in Twitter followers ever: 3.2x its average daily number, for a total of 5,506 new followers on November 22. That’s when the network asked fans to tweet questions for the next day’s show.

Twitter on air
Twitter was integrated throughout the Food Network’s Thanksgiving show broadcast. There was a touchscreen on the set where the chefs looked up fans’ questions from Twitter and other social platforms. 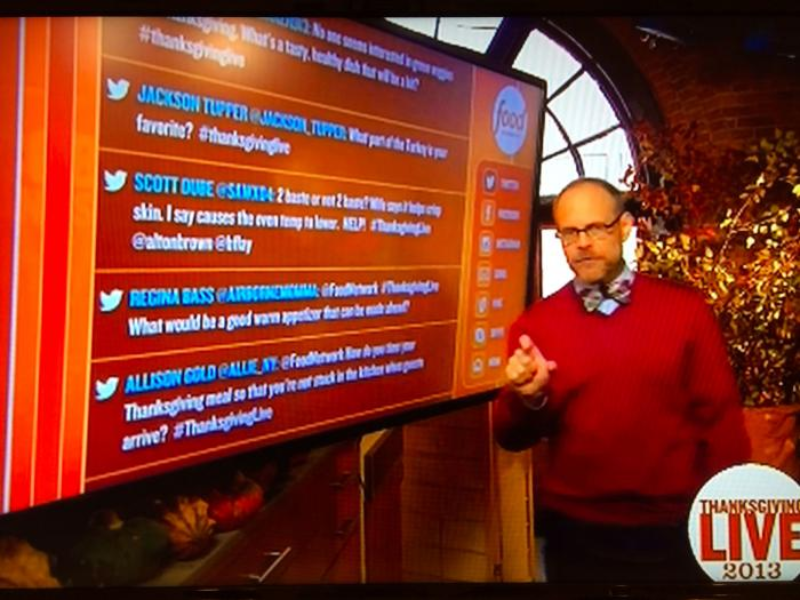 Photos courtesy of the Food Network.

As seen with the wall of Tweets next to @altonbrown in this photo, some of those Tweets appeared on air, including on a crawl at the bottom of the screen.

The hashtag #ThanksgivingLive proved critical, as it was a way to organize Tweets about the show so fans could join the conversation — and see what questions other people were asking. @FoodNetwork also created custom hashtags so fans could weigh in and share their opinions on Twitter. For instance, @FoodNetwork asked people their opinion on whether to brine or not to brine a turkey: wet brine (#TGLwetbrine), dry brine (#TGLdrybrine) or no brine (#TGLnobrine). The network displayed the results on air: 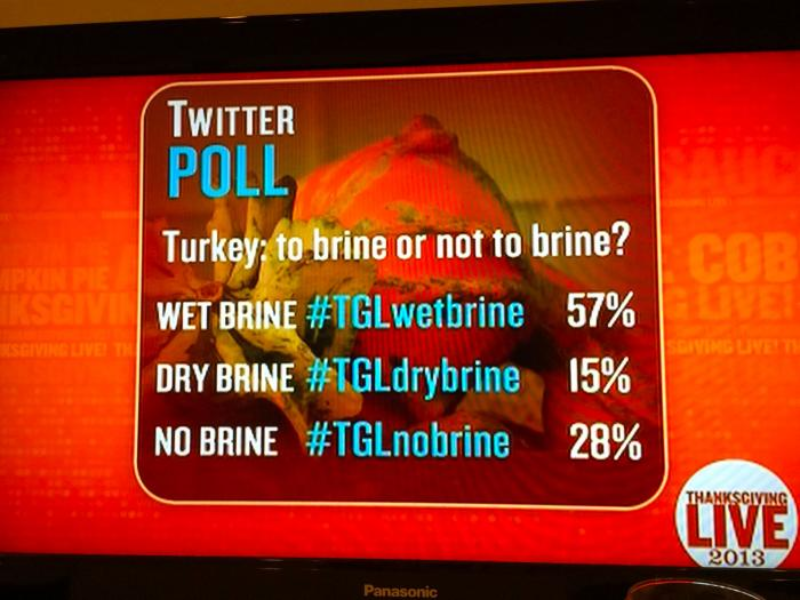 A cornucopia of Vine videos
@FoodNetwork also used @Vineapp to ask fans to share their own recipes in Vine videos. Some of the most creative responses were shown on air, such as this:

As Bobby Flay (@bflay) picked out different Vine videos to showcase, the other chefs commented and encouraged him to show more.

Promotion and live-tweeting
In the days leading up to the show, @FoodNetwork promoted it on Twitter with the hashtag #ThanksgivingLive. @FoodNetwork asked questions, posted videos, shared behind-the-scenes photos and more.

@FoodNetwork was not the only account tweeting. The network took advantage of its talent’s star power and Twitter following, as the chefs — including @altonbrown, Giada De Laurentiis (@GDeLaurentiis), @SunnyAnderson and Flay — tweeted before and during the show.

The chefs continued to engage fans even when they weren’t on air. They live-tweeted during the show, sharing photos of their food — and themselves — on Twitter.

To give followers just what they were looking for before sitting down to their own feasts, @FoodNetwork made a custom timeline of #ThanksgivingLive Tweets: