Speaking at the recent #TweetsFromTheTop Twitter event for chief executives, Miller (@AndrewMiller100) says 10% of the newspaper’s traffic now comes from social media, and that Twitter is central to its efforts.

Miller highlights how, for the biggest breaking news story of the year so far, that of NSA whistle blower Edward Snowden, the story “really broke from us and on Twitter. It took an hour before the breaking news stations got this,” he says.

According to internal figures released to @TheAtlantic, the Snowden story is reported to have set a one-day traffic record for guardian.co.uk, as it attracted almost seven million unique browsers. 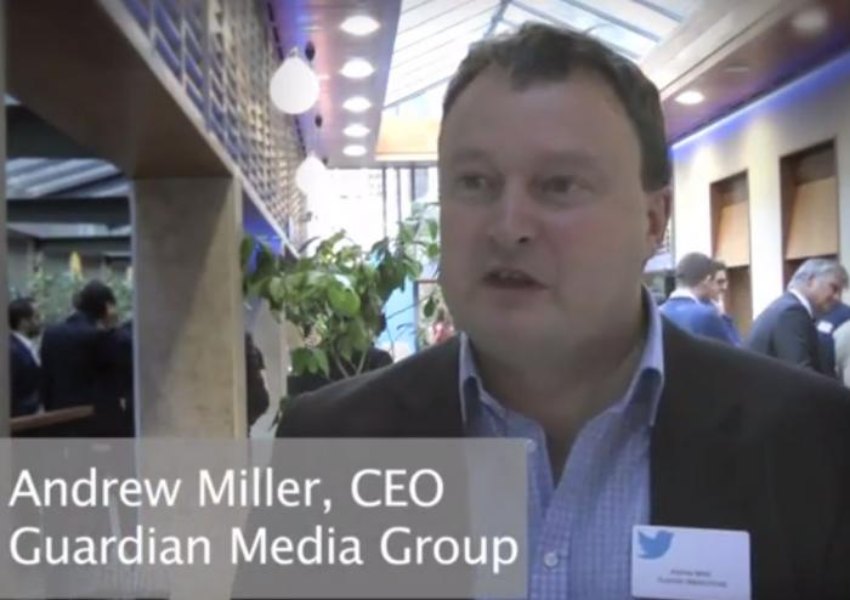 Increasingly, Twitter drives the traffic for major breaking stories like Snowden, which, according to Miller, now regularly outstrips other social media platforms.

In a video interview (see below) he says that on key breaking news stories the guardian.co.uk has seen Twitter surpass referrals from other social platforms on a daily basis.

Driving that traffic becomes even more important to The Guardian, Miller says, as it makes a big push into markets outside of the UK, where it has no printed newspaper.

“Because we are moving the brand of the Guardian, not just in the UK but overseas, and in places like America and Australia, where they don’t know the brand, [Twitter] drives traffic much more quickly to our site.”

While Twitter has become central to the Guardian for breaking news, it is also integral to its commercial operation and demanded by clients and agencies alike.

“Twitter absolutely helps us with the advertising proposition we have. Twitter is a must have for clients as part of a proposition of multimedia engagement on campaigns we do.”

He says the best clients and the best agencies want to work with media partners who “work across all aspects of media, from a newspaper to leading edge social media, and therefore Twitter is a very important part of our portfolio of options”.

On a more personal note, Miller related at #TweetsFromTheTop why he got on Twitter: “I Joined Twitter as we are at the heart of a media space where the consumer is changing their habits all the time. To be in that space you have to be on Twitter,” Millers says.