How buzz builds around ‘The X Factor’ on Twitter

Twitter and television have proved to be natural partners. This is often highlighted by how conversation builds around some of the most popular shows on TV such as ‘The X Factor’.

As the ITV-Simon Cowell talent juggernaut returned to UK screens on August 31, we looked at how ‘The X Factor’ conversation develops on Twitter and created a dynamic visualisation to tell that story.

The dots in the video represent individual Tweets, blue for original content and yellow for a Retweet. The bigger those blue dots and more visible they are, the more influence that individual has. This is shown most dramatically when a member of One Direction enters the conversation. 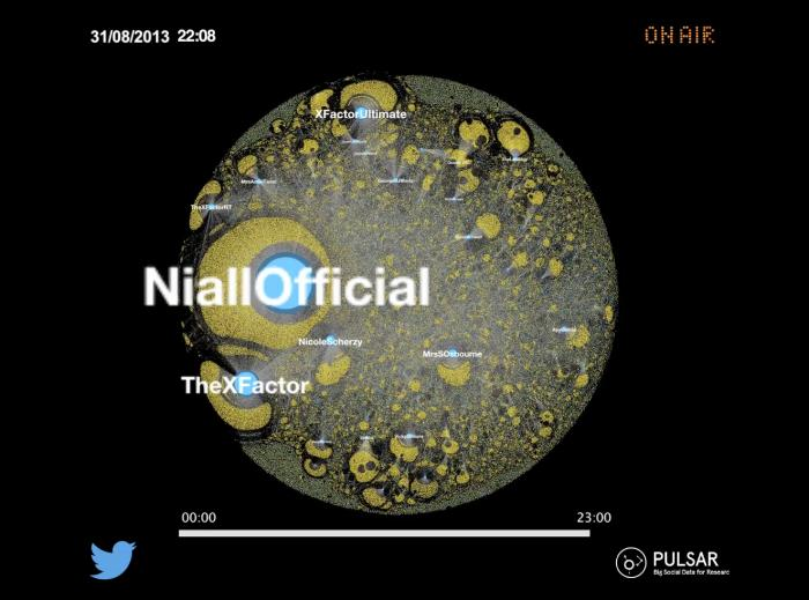 The picture underscores Twitter and TV’s symbiotic relationship and illustrates that conversation around big shows, such as ‘The X Factor,’ starts taking place in social spaces well before the programme airs.

For advertisers, it gives a clearer picture of how conversation takes shape around big TV moments. With ‘The X Factor,’ we can see Tweets are sent starting early in the morning, with momentum building throughout the day as people chat and speculate about what the 2013 series will bring in the way of new talent.

Conversation really starts to bubble in the afternoon as the official @TheXFactor account tweets, followed by other influencers, which are represented by solid blue dots. As the programme nears broadcast time, the level of conversation increases.

At eight o’clock, the conversation takes on a frenetic pace with people weighing in on this year’s contestants. More key influencers join the conversation, including @SimonCowell, @NicoleScherzy and @MrsSOsbourne.

At 21:43, Niall Horan (@NiallOfficial) of One Direction fame enters the conversation. With 14.2 million followers, his influence causes an explosive burst of activity. It shows again, as was highlighted in our recent look at how videos go viral on Twitter, the impact that a single influencer can have on the conversation.

Finally, the high levels of activity are reflected in viewing figures. Ratings for the first Saturday show were up 6% on 2012 to 9.2 million. ‘The X Factor’ buzz on Twitter is stronger than ever.