How @USNavy kept the facts straight

As news of the Washington Navy Yard shooting began to spread, the @USNavy kept the facts straight on Twitter during a fast-moving situation.

The Navy initiated its flow of information almost immediately, with the first official confirmation just minutes after the shootings took place:

As the day progressed, @USNavy tweeted updates as soon as additional details became available. “It is important to be out there with the facts as you have them,” says Jason Kelly, director of emerging media at the U.S. Navy. “Within seconds of sending a Tweet, it was immediately being quoted by multiple news organizations. Twitter became the news wire on that day; the Navy’s Tweets were the news bulletins.”

@USNavy also interacted with those needing information. “Something that was important was establishing our hashtag, #NavyYardShooting, on the second Tweet,” says Kelly. “This let everyone know where the conversation would be happening.” This Tweet became the single most-retweeted from @USNavy yesterday:

Here’s how the @USNavy account’s Tweets became part of the story as interest on Twitter spiked with around 1,900 Tweets per minute by 2:13 p.m. ET: 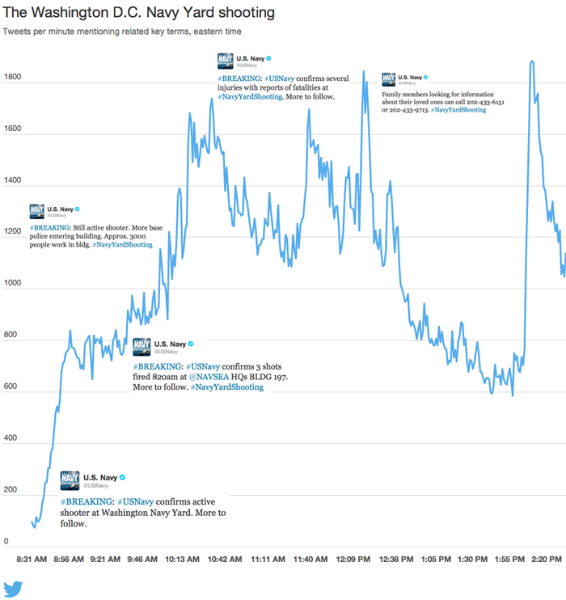 How other organizations spread the word
In addition to the Navy, several local organizations turned to Twitter to offer relevant information. For instance, the D.C. police posted regularly throughout the day:

As did public schools, hospitals and government buildings:

We are continuing to work closely with MPD. When MPD advises that #navyyardshooting is resolved, we will lift the school lockdown.

Because of the law enforcement activities at the Navy Yard, our building is on lockdown & no customers can enter the building.

And local transportation outfits gave updates on closures and resumption of regular services:

.@FAANews has lifted the ground stop at @Reagan_Airport. Expect residual delays as we return to normal operations.

D.C. @MayorVinceGray was active throughout the day, posting and retweeting official information and updates:

All US & DC flags at District government facilities will be flown at half-staff until sunset on Friday, September 20, 2013.

Since events in D.C. are often national in scope, the @WhiteHouse also used Twitter to post updates, information and condolences:

President Obama called @USNavy Sec. Ray Mabus to express his condolences to the families of the #NavyYardShooting —> http://t.co/7fA0EmIa50