What is it that makes videos go viral? It is one of the big questions in digital marketing. While there is no single magic formula, we’ve come up with some key insights after tracking the stories behind three recent viral videos.

Our UK Research team looked at popular videos that are all very different in nature. They range from Dove’s Real Beauty campaign to the Ryan Gosling “won’t eat cereal” videos and Commander Hadfield’s ‘Space Oddity’.

One of the key things we learnt from looking closely at these three is that videos don’t go viral in the same way. There are no rules to “virality” — while some ignite, and spread like wildfire across the web, the growth of others is much more measured, like ripples spreading across a lake. 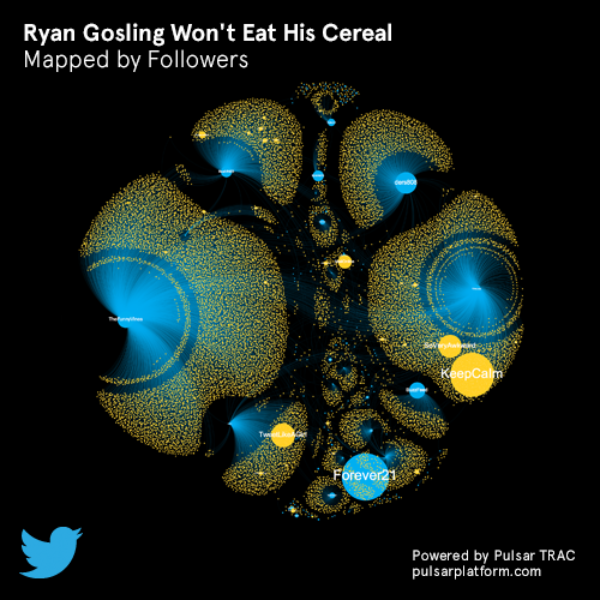 In each of the dynamic visualisation videos you can see how fast the three videos went viral. In each one, there’s a mixture of blue and yellow. The blue nodes represent Tweets; the bigger they are, the larger the potential reach of that Tweet. The yellow dots represent retweets. In each case, reach takes into account not just followers, but also audience size and amplification by retweet.

This video took its creative expression through Vine as a pop culture gem, comprising a series of six-second clips of A-list actor Gosling being offered spoonful’s of breakfast cereal.

The videos, created by @RyanWMcHenry, were carefully seeded with key influencers in the world of Vine such as @BestVinesEver and @VineLoops. This ensured that the videos went viral quickly, echoing the online journey of a major breaking news story.

Key insight - The success of the Gosling viral points to the power of effectively seeding your content with the top influencers and how if you hit just a small number of those it can in some cases go global.

Ryan Gosling not eating his cereal is the best use of vine so far http://t.co/ba3BTyOsp5 https://t.co/jINOFaVlSl

Singing astronaut Commander Chris Hadfield gave a rendition of David Bowie’s ‘Space Oddity’ while he was orbiting the Earth aboard the International Space Station. It spread quickly around the globe; more than 90% of shares took place in the first three days after he posted it.

Key insight - Link mentions peaked fast and were driven by global influencers. The viral effect demonstrated sustained growth that was driven by a single person’s effort. Hadfield’s link was much more appealing to the crowd because of its unique nature than a more earthbound video and as a result he featured much more prominently in the sharing of this video than other viral examples.

The video for Dove’s Real Beauty Sketches #WeAreBeautiful campaign spread very differently to any of the others, and was largely driven by a long tail of link-sharing and by positive audience sentiment.

Key insight - This video showed less burnout than the others, and there were also fewer influencer-induced spikes. Instead, conversation existed in clusters of communities spread around the world — showing the value of local engagement — and highlighted the good use of a digital outreach programme.

Tweets containing video have strong engagement rates, with 42% likely to retweet, reply, or mention brand Tweets that contain a fun or interesting video.

Videos integrate seamlessly into a Tweet, and every Tweet is instantly shareable. Make sure you devise a hashtag to organise the conversations around the video campaign and messages.

Use Promoted Tweets and Trends to help surface and amplify your message. Combine with interest and keyword targeting to hit the right audience.

4. Get creative with Vine

Vine lets you create six-second looping videos that are instantly shareable on Twitter. And if you really love it you can Re-vine!