Advertising on Twitter works well because the experience is built into the fabric of the product: a Promoted Tweet, for instance, is simply a Tweet targeted using the interest graph formed from public user signals like follows.

Until today, the content of Tweets has only been one factor among many in shaping the interest graph. Today, it becomes a first-class citizen. We’re excited to roll out the newest feature on our ad platform, keyword targeting in timelines, available today in all languages and markets where Twitter Ads are supported

Available in the full Twitter Ads UI and through the Ads API, this new feature enables advertisers to reach users based on the keywords in their recent Tweets and the Tweets with which users recently engaged. This is an important new capability – especially for those advertisers looking for signals of intent – because it lets marketers reach users at the right moment, in the right context.

For example: let’s say a user tweets about enjoying the latest album from their favorite band, and it so happens that band is due to play a concert at a local venue. That venue could now run a geotargeted campaign using keywords for that band with a Tweet containing a link to buy the tickets. That way, the user who tweeted about the new album may soon see that Promoted Tweet in their timeline letting them know tickets are for sale in their area.

Users won’t see any difference in their use of Twitter — we’re not showing ads more frequently in timelines, and users can still dismiss Promoted Tweets they don’t find relevant. In fact, we believe users’ experiences with ads will improve as a result of this feature as they see more relevant Promoted Tweets. In our tests with a small group of advertisers and agencies like Everything Everywhere (@EE), Microsoft Japan (@SurfaceJP), and Walgreens (@Walgreens), users were significantly more likely to engage with Promoted Tweets using keyword targeting in timeline than other forms of targeting in the timeline.

GoPro (@GoPro), a leader in wearable and gear-mountable cameras, is a great example of a test partner that achieved promising results. After testing keyword targeting in timeline across four marketing campaigns, GoPro saw close to two million impressions, and engagement rates as high as 11 percent on Tweets promoted using the new feature.

Setting up a campaign to target keywords in the timeline is very similar to the setup process for search. Enter the keywords you want to target, choose whether you want to use phrase match or unordered keyword match, and specify your other targeting options such as geographic location, device and gender. 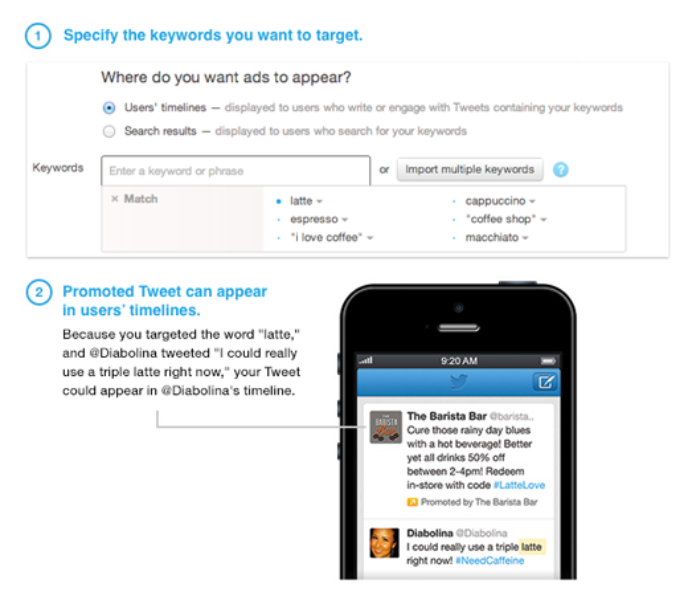 We’re excited to see how our advertisers take advantage of this new feature. For more information about how the keyword targeting works, please see our help center article.