We like to say that Twitter was born mobile. After all, the 140 character limit of Tweets was based on text messaging or SMS constraints. That means our platform was actually designed to allow anyone, anywhere to read, write and share Tweets.

Today, mobile is often the primary way people around the globe experience Twitter. Sixty percent of our 200 million active users log in via a mobile device at least once every month. So how is a user that accesses Twitter primarily on mobile different from the average Twitter user?

Working with Compete, we found that these primary mobile Twitter users in the U.S. are more engaged in several key ways. Namely, they are on the platform more often, they interact more with Tweets and they follow more brands. Here are the top five findings that advertisers need to know to better connect with these mobile consumers on Twitter:

1. Primary mobile users may be on the go but they’re on Twitter more than the average user.

Advertiser tip: Many Twitter users rarely access Twitter on desktop so don’t forget about mobile targeting when developing Twitter Ads campaigns. Target messages by device to optimize reach and drive on the go engagement. Think about content that’s easy to interact with and consider the experience beyond the Tweet too – for example, link to sites that are optimized for mobile.

Compete found that 18 to 34 year olds are 21% more likely to be logging into Twitter primarily via a mobile device. Not a big surprise since younger consumers tend to be stronger adopters of mobile in general. We found no statistically significant difference in the gender breakdown of primary mobile users of Twitter. It’s a pretty even split.

Advertiser tip: When targeting on mobile, consider the age of the core audience that you are trying to reach. You may want to prioritize campaigns that more closely align to the life stage of the 18-34 demographic as well as their interests. But, remember, on Twitter who you follow is also a strong indicator of what you care about. When targeting people who follow your brand on mobile, speak to that interest, not just a person’s age.

3. Primary mobile users engage with Twitter throughout the day.

Primary mobile Twitter users are also 181% more likely to use Twitter during their commutes. Once they get to work or school, they are 119% more likely keep using Twitter. And this Twitter use extends into their social time. 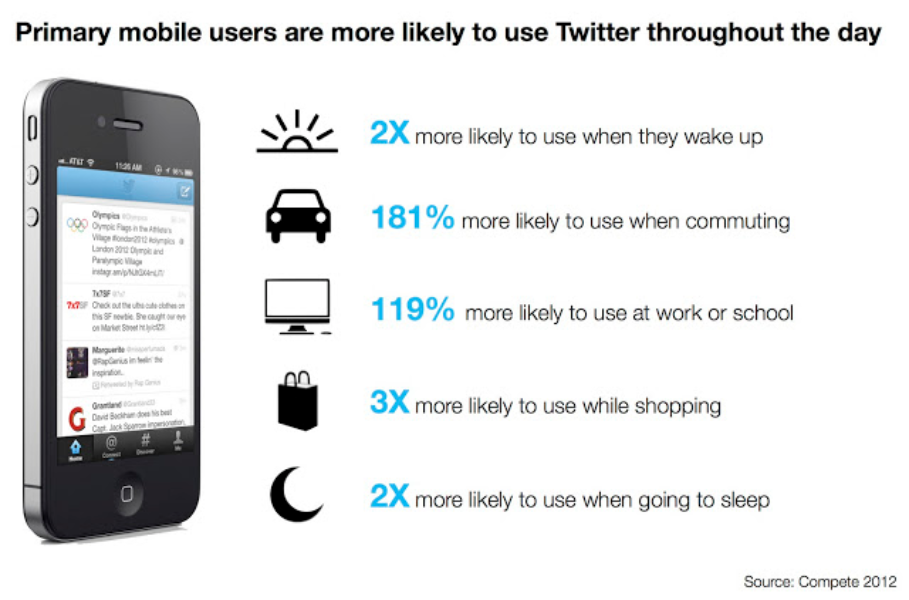 Fifty-seven percent of mobile Twitter users communicate with people near them via Twitter. What exactly does that mean? Think about times when you send a friend a Tweet who you are meeting at a store to let them know you’ve already arrived. Or you tweet a photo with friends and include their Twitter handles when you’re all out at a restaurant.

Primary mobile users also access Twitter inside the home. Sixty-four percent use Twitter in front of the TV at home. Primarily mobile users are 28% more likely than the average Twitter user to use the platform while they are watching television.

Advertiser tip: When creating Twitter campaigns, think about a day in the life of your target consumers. Consider where they are, what they are doing and who they might be with at key moments during the day and evening. Think about timing Tweets to reach people wherever they are – 24 hours a day, seven days a week.

For some campaigns, this might mean during rush hour when they want to be distracted. Or during the weekend while they are out and about with friends. Don’t miss the chance to engage primary mobile users at home too. Integrate Twitter with your TV strategy to maximize the dual screen experience. 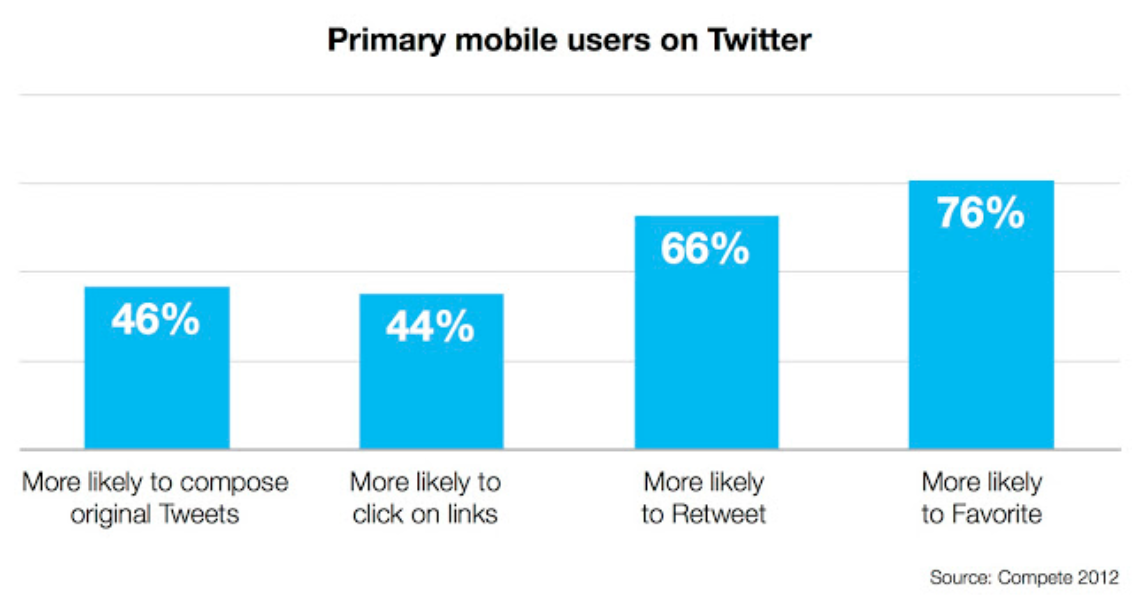 Advertiser tip: Mobile users tend to be amplifiers. Drive engagement and earned media by creating Tweets that include rich media, links and strong call to actions. Simply including the words “Please retweet” has been shown to increase the likelihood of being retweeted by 23 times, according to Buddy Media.

Advertiser Tip: Create Tweets that align with what mobile users need: real-time information that helps them make decisions as they go about their daily lives. They may be shopping near your store and a Tweet about your current promotion might get them in the door. They may be waiting in a line at your bank and looking for information that will make the transaction easier. Think about creating campaigns centered around useful information or special offers that someone can act on immediately.

Bottom line: As consumers continue to shift their time to mobile, a big opportunity arises for brands. Mobile is in our DNA at Twitter, which means our platform can connect your brand to users in real time, wherever they are. Because mobile ads on Twitter are part of the organic content experience, they create a particularly powerful vehicle for brands to create reach, build frequency and drive engagement.

UPDATE (2/22/13): We’ve corrected some data points in the original post where some of the mobile primary user sample was ignored. All figures are now representative of the complete sample.