61Fresh has found an interesting way to use Twitter to let Bostonians decide what news they care about most. Created by the Boston Globe’s R&D group, @GlobeLab, and funded by a Knight Foundation (@knightfdn) grant, the site’s mandate is simple: to aggregate all Boston-related news, as tweeted by Boston residents.

Like other crowd-driven news aggregators, @61Fresh draws from hundreds of Boston-area news sources (more than 500 in total) to pull together a full picture of what’s happening in the region. The site is unique in that it uses Bostonians’ Tweets to source and rank stories in order of popularity, as measured by mentions (including Tweets and retweets). “Our primary goal is to highlight Boston news that Bostonians are talking about,” says Dan McLaughlin, from the @globelab team. “So we follow Twitter users in the Boston metro area, and look at the links they’re tweeting.” 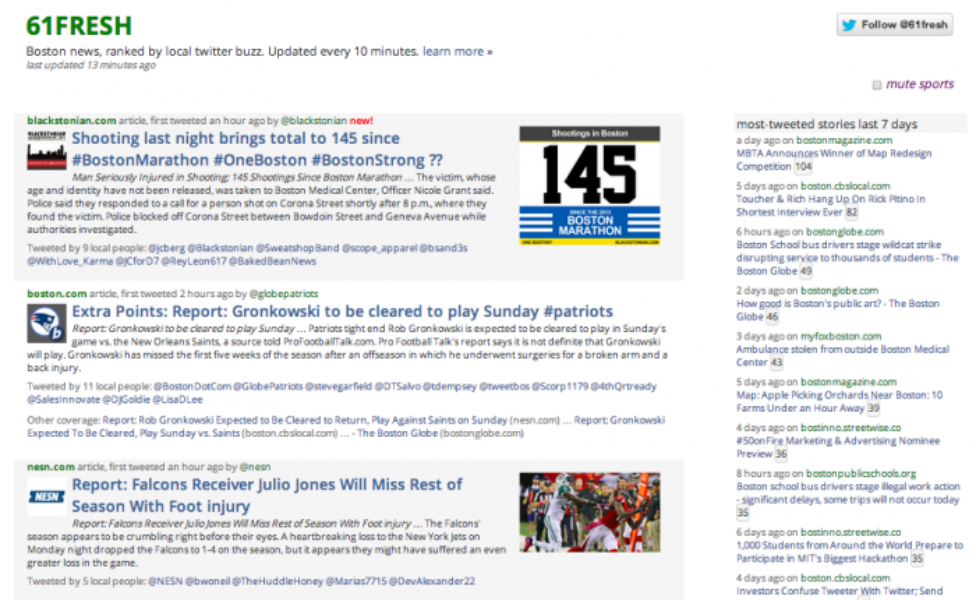 Screenshot used with permission from 61Fresh

The genesis of the project came from a desire to streamline the local media landscape. “There was a need for a single page where the major stories of the day could get attention regardless of where they came from,” says Chris Marstell, creative technologist at @globelab. But with a multitude of potential sources, the trick was separating a signal from the noise. “Twitter and its API was the obvious solution,” says Marstell, “A local Tweet about a story could represent a vote for its importance at a moment in time.”

In all, 61Fresh identified a group of 250,000 local Twitter users who could help choose the news and followed them all - in fact the number is always growing as the team find new users. The team created its own algorithms to determine where Tweets were originating, and used filters to identify top stories (one filter lets users filter out any sports-related news). Rather than using traditional headlines, 61Fresh uses Tweets on its homepage to call out specific stories.

The site gives a glimpse of how Twitter closes the loop between news and real-time conversations. The team stores Tweets in a database to power the @61Fresh homepage. To build clusters of stories about the same topic, the team uses a process called Latent Semantic Indexing, which looks for specific language terms. To organize the page order, they use an algorithm that balances the scope of the conversation against that story’s age, so that new ones rise to the top, and important ones don’t get buried.

While the underlying algorithms may be complicated, the site itself is simple: a one-stop shop for all news related to Boston and Bostonians.

Do you know of any other innovative uses of Twitter for news? Let us know at mediablog@twitter.com.