Last October, we collaborated with Nielsen (@NielsenWire) to announce Nielsen Brand Effect for Twitter, a new survey tool for advertisers to measure the impact of their Twitter campaigns on brand metrics. Starting today, we are moving this capability out of beta and making brand surveys widely available to our advertising partners in the United States, the United Kingdom and Japan. We also want to share exciting initial results that demonstrate Promoted Tweets drive stronger message association, brand favorability and purchase intent.

In recent months, Nielsen analyzed brand survey data to measure how Promoted Tweet campaigns influence the audiences that see them. Three key findings emerged among advertisers who participated in our beta: 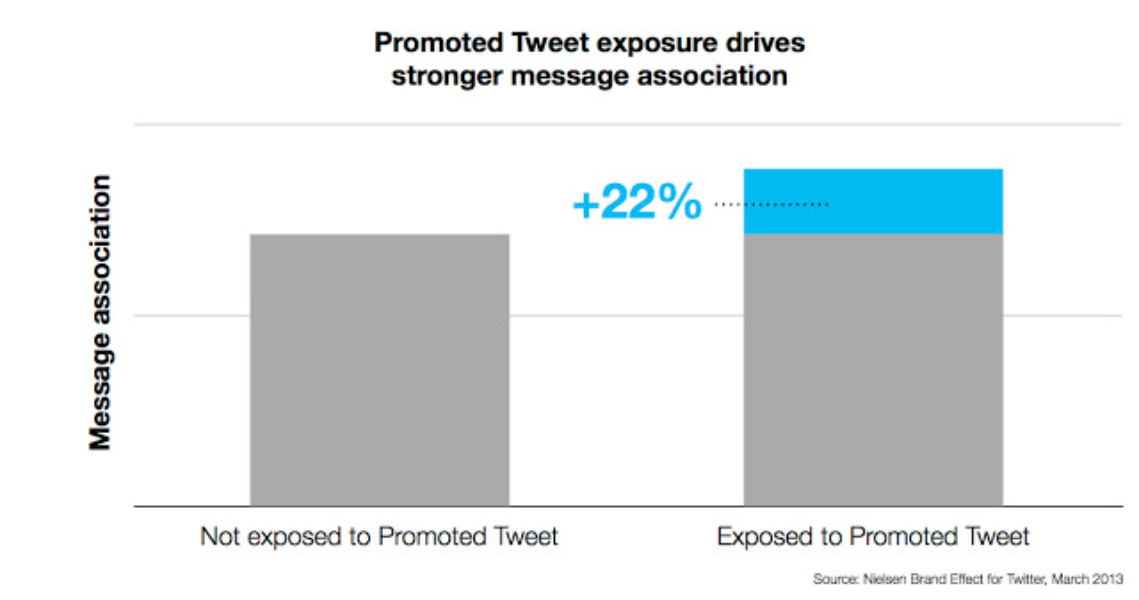 2. Brand lift is amplified by multiple exposures to Promoted Tweets.

Multiple exposures (two or three times) to a Promoted Tweet campaign lead to 10% lift, on average, in brand favorability compared to users exposed to the campaign once. This illustrates the value of an always-on Promoted Tweet strategy to continually reach interested users with brand messages.

Users who engage with a brand’s Promoted Tweet report on average 30% higher brand favorability and 53% higher purchase intent than non-engagers. This study result highlights the value of an engagement on Twitter and the importance of reaching a relevant audience with compelling Tweet copy to further drive Tweet engagement.

Pepsi (@Pepsi) was one of the advertising partners who participated in the beta and found similar effectiveness for their Promoted Tweet campaigns based on brand survey results.

“The ability to measure the brand impact of our campaigns is immensely valuable and something we strive to understand across marketing vehicles,” said Shiv Singh, global head of digital for PepsiCo Beverages (@shivsingh). “We’ve run brand effect surveys on Twitter for a couple PepsiCo brands, and they’ve allowed us to connect Twitter campaign performance to more standard brand metrics. The survey results demonstrate to us the effectiveness of Twitter Promoted Products, while also providing insight for optimizing future campaigns.”

To create a user experience that feels native to our platform and increases the likelihood of participation, brand surveys on Twitter are embedded within Tweets. Unlike other major publisher platforms, we do not require a click through to an external site or interrupt the user with a pop-up. Another unique feature of our brand surveys: advertisers are able to measure and compare survey responses from users who have been exposed across devices – desktop, tablet and smartphone.

Brand surveys on Twitter leverage industry-standard Nielsen Brand Effect methodology including pre-campaign creation of test/control groups and post-survey analysis. Advertisers can measure perceptions among followers and “engagers” (users who engage with the advertiser’s Promoted Tweet through a click, retweet, reply, or favorite). Brand surveys can also help advertisers understand how audience perceptions differ among segments, including interest targets, geography and gender in a way that is consistent with targeting options for Promoted Tweets. No individual Twitter user information is shared with Nielsen or advertisers.

Nielsen and Twitter will continue to release more findings on the effectiveness of Promoted Tweets in shifting brand perceptions in the near future. Ultimately, we hope these learnings help advertisers optimize their Twitter strategy and content.