Sports and Twitter are made for those who love to geek out on data — and now there’s a new way to look at the numbers around the year’s biggest sports events, such as the NBA finals, the Super Bowl, March Madness and more.

For three years, Sports Illustrated (@SINow) has produced an annual Twitter 100, a list of the 100 top accounts to follow in the world of sports. This year, the team at SI has also created a rich interactive guide which commemorates the big moments, personalities and games that made the last 12 months such a momentous year in sports. 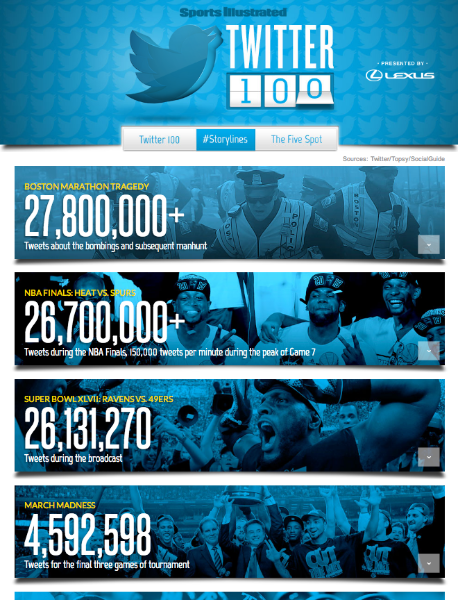 Based on a poll of SI staffers and contributors, the list gives the readers a who’s who of sports Twitter accounts - including athletes, sports commentators, websites and teams.

It’s more than just a list though. Twitter data has been woven into the sporting events of the year.

For example, click on #Storylines and you can see the Super Bowl broken down by the moments during the game that generated the most Tweets-per-minute. Click “Andy Murray wins Wimbledon” and you can see a map showing every geotagged Tweet about Wimbledon. All major sporting moment of the year are part of this comprehensive look at the world of sports on Twitter.

The guide also features The Five Spot, an interactive feature that highlights five pro athletes — Connor Barwin, Logan Couture, Brittney Griner, Logan Morrison and David Price — and their picks for the Twitter accounts you must follow.

Who did @SInow leave out of its Twitter100? The SI team is asking; let them know using the hashtag #SITwitter100.

Have you seen other innovative uses of Twitter data? Email us at mediablog@twitter.com.