Throughout the year, and especially during the holidays, Twitter brings people closer to a particular passion: shopping. According to Crimson Hexagon, holiday shopping conversations increased in 2012 by 30% over the previous year. Buzz on Twitter peaked around key shopping dates, as you see here: 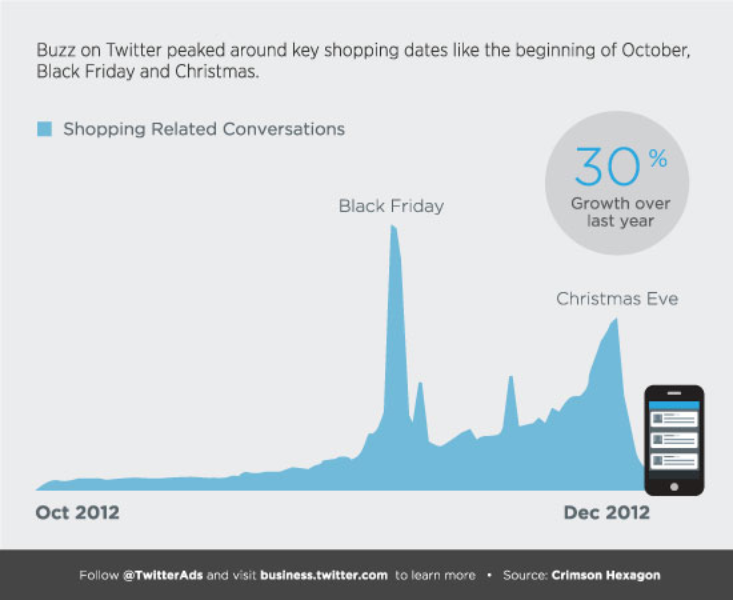 Brands also turn to Twitter throughout the year. Since last September, the number of retailers on our platform increased by 1.9X. They use Twitter to connect with shoppers talking about products, deliver relevant offers and monitor shopping trends in real time across retail categories.

In early fall, many retailers start using Twitter to spark gift ideas among shoppers and to preview holiday inventory. “Twitter has become an essential way for Target to give our guests the inspiration and ideas they crave whenever they’re in the mood to shop,” says Shawn Gensch, SVP of Marketing. “It’s especially important throughout the holiday rush when people are ticking to-dos off their list, looking for great deals to create a memorable holiday experience.”

To get a deeper understanding of Twitter’s influence on shopping decisions about stores and brands, we commissioned a survey from research firm DB5, which surveyed 2,000 U.S. holiday shoppers, more than half of whom use Twitter regularly. Here’s what we found:

We found that Twitter is a key part of the way people make purchase decisions. Fifty-five percent of our users like to discuss gift ideas on Twitter. Clothing and electronics were the top two categories that Twitter users said they are likely to purchase this holiday season.

Two-thirds of respondents told us that they learned about new products on the platform. And this influence directly affects purchase decisions: 64% of people who responded to the survey said they have bought a product because of something they saw on Twitter. Over 57% of Twitter users reported they would “often” or “sometimes” make a purchase from their mobile phone.

Twitter plays a key role in how and where people shop.

Twitter doesn’t just help people decide what to buy; our platform influences where they shop. Fifty-seven percent of users told us they use Twitter to determine which stores to visit. And Twitter’s influence extends right into the retail environment.

Almost half of survey responders said they check Twitter while in a retail store. Forty-five percent even said they would rather take Twitter shopping with them than their husband or wife! After they buy something, Twitter users also share those purchase decisions with others: 62% of people who responded to the survey said they tweet about a purchase.

These key findings reflect Twitter’s effect across every stage of the shopping process: shoppers use Twitter to discuss gift ideas, discover new products, determine what stores to visit, make purchase decisions and tweet about what they buy. And these actions offer brands a valuable opportunity to connect with consumers in real time through useful and relevant content like Radio Shack’s special offers last Cyber Monday (See more retailer success stories here.)

We’ll continue to analyze how smart holiday shoppers and savvy brands are using Twitter throughout the holidays, and we’ll share what we find here.