The #Blackfish phenomenon: A whale of a tale takes over Twitter

Not since the story of Moby Dick has a whale been so famous: The plight of Tilikum the SeaWorld orca told in the @CNNfilms documentary Blackfish (@Blackfishmovie) has created a social media tale uniting campaigners and celebrities alike.

But it didn’t just happen organically. The show’s social success was the result of an active Twitter campaign that saw protesters, news anchors and celebrities taking part in a live conversation while the show was being broadcast.

More people tweeted about Blackfish the night it aired than any other non-sports program on TV except for Scandal, according to SocialGuide. There were 67,673 Tweets seen by 7.3 million people about the show, which makes it the most-most talked about show on CNN in October.

Those big numbers were repeated in the Nielsen ratings, which saw the show top the cable news ratings on October 24, pulling in more than 472,000 viewers in the key age range of 25-54, ahead of any other cable news channel.

@CNNfilms anticipated that #Blackfish would take off on Twitter. They’d already seen the Twitter conversation grow since the film first debuted at Sundance in January. The question was how to leverage that growth.

Lila King (@lilacina), CNN’s senior director for social news, says the team aimed to create a synchronous experience between Twitter and TV. “Our approach was to create a back channel to the broadcast, featuring live Tweets from experts such as filmmaker Gabriela Cowperthwaite (@GabCowperthwait), CNN reporter Martin Savidge (@MartinSavidge), marine biologist David Shiffman (@WhySharksMatter), film producer Manny Oteyza (@mannyoprods) and many others,” she says.

From Gabriela, Director:Bravo CNN for breaking the mold and starting a much belated convo. No more circus! #blackfish

Create a back channel to the broadcast on Twitter.

Twitter was integrated into the broadcast too: “We invited our audiences to join the conversation by showing the #blackfish hashtag on the screen, and also curating the conversation in a live blog on CNN.com.”

CNN maximized its coverage of the film by leveraging its own scale and promoting Blackfish through several of its regular show accounts, including Crossfire (@Crossfire) and Anderson Cooper 360 (@AC360):

Would you take your kids to SeaWorld? Reply now with Yes or No using #Crossfire. Our debate on #Blackfish airs at 6:30pm ET

The documentary was also followed by a post-show debate on Anderson Cooper 360, which topped the ratings over cable news shows at that time. Cooper encouraged audience engagement and tune-in by posting Twitter polls and asking for followers to share their opinions leading up to the debate.

Watch #Blackfish after #AC360. Then stay tuned for in-depth discussion on animals and captivity.

The scale of the debate was also driven by celebrity Tweets. Take this one by @ArianaGrande, for example, which was the most-retweeted of the night:

I highly recommend all of my fans watch #Blackfish and never go to @Seaworld again. ? Used to love that place. Beyond heartbroken #FreeTilly

The show saw Tweets by some of the most-followed accounts on Twitter, such as actor @StephenFry, as well as from actors Michelle Rodriguez and Zach Braff, each of whom Tweeted to their followers to watch the show.

You can’t always control how the audience reacts on Twitter, but you can take advantage of it.

The reaction from campaigning groups such as @PETA, which drove followers to watch the broadcast, took CNN by surprise, says King. “One thing we hadn’t expected was that a group of activists would organize a ‘tweet storm’ around the film, encouraging people to tweet with the hashtag #BlackfishOnCNN in a concentrated period of time. Their efforts were impressive, and they scored a trending topic in the U.S. during the broadcast.”

RT if you’re watching @blackfishmovie on @CNN right now! Let the world see the truth about @SeaWorld once & for all. #BlackfishOnCNN

King observes that this kind of success carries risks: “We were of course delighted to see so much interest in watching CNN, but ultimately decided not to jump on that hashtag with our own Tweets since the initiative came from a group with a very one-sided view of the issues. Obviously as a news organization, it’s important to us to remain neutral in our reporting.”

The social conversation around the show delighted the CNN team, King recalls. “We were really pleased with the scale and quality of the social conversation around the film. Now I want to watch every documentary that way, together with the filmmaker and the people who know the issues inside and out,” she says. “It’s like attending a film festival screening in your living room!”

Via Twitter, viewers could engage with the filmmaker, experts and others watching #Blackfish.

Learn from the experience

When asked what she would do differently next time around, King noted that “Immediately after the film aired on CNN, Martin Savidge hosted a live roundtable conversation about Blackfish on Anderson Cooper 360. I would have liked to weave more of the Twitter conversation into that show. We’ll certainly look for ways to connect the conversation across platforms more seamlessly for the next films.”

Look at the data

According to Topsy, @CNNfilms gained more followers after Blackfish than it had since its Twitter account launched in July 2013.

Even @SeaWorld gained over 500 followers, seven times its daily average for 2013.

Also of note, mentions of “Blackfish” eclipsed mentions of @CNN, which is one of the biggest news accounts in the world:

This chart shows a network of the most-mentioned Twitter accounts in the Blackfish discussion. The blue accounts are doing the tweeting and the yellow accounts are the ones mentioned. The size of circles represent the numbers of retweets and other mentions on Twitter of either the yellow or blue accounts.

Click on the chart to see which accounts were mentioned most often out of the 500 most-mentioned Tweets. 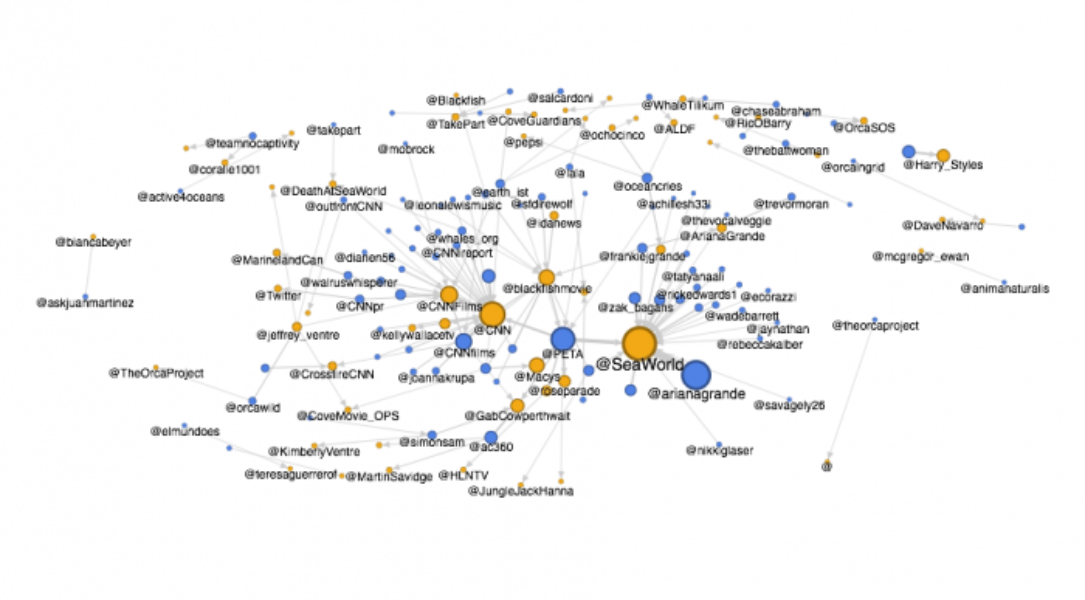 The most-mentioned account was @SeaWorld. Close behind was @PETA, which was active on Twitter during the screening, and third was @CNN, which benefited from the branding associated with the show.

Have you seen other innovative uses of Twitter? Write to us at mediablog@twitter.com.