On September 22, Germany went to the polls to choose its next chancellor, which resulted in a landslide victory for current Chancellor Angela Merkel and the CDU party. In the aftermath of the election, media experts and voters discussed the outcome on Twitter, while several politicians also announced their decision to step down via Tweets.

Throughout the German “Bundestagswahl 2013” (official hashtag #btw13) Twitter was the place where the live, public discussion around political topics and events took place, becoming an important communications channel for parties and politicians alike. It also became the place to measure the sentiment of the electorate and to gauge which topics were most important at any given moment.

The candidates debate and viewers respond
There was only one televised debate between Angela Merkel and her opponent for the SPD party, Peer Steinbrück (@peersteinbrueck). It was, along with election day, one of the major highlights of the eight-week German election cycle. With 173,000 Tweets during the 90-minute TV show, the viewers had the most to say during Chancellor Merkel’s final statement, which generated more than 2,600 Tweets per minute (TPM).

Despite the gravity of the proceedings, viewers had fun with the black, red and gold (colors of the German flag) necklace that Angela Merkel wore during the debate, which led to much Twitter banter. The “halskette” (necklace) made it into the worldwide trends on Twitter, the headlines of the national press, and led to its own Twitter account @Schlandkette.

Viewers weigh in with hashtag votes
The show “Wie geht’s Deutschland?” on ZDF, where politicians from several parties were debating various topics, used Twitter to engage directly with its audience by asking them to tweet with the hashtag #wiebitte if the politicians didn’t answer the questions appropriately and with the hashtag #wiegehts when they wanted more information around a specific topic. ZDF used the real-time responses from viewers to highlight which statements were resonating well and which topics needed further exploration.

Twitter data identifies top election topics
To identify the topics that resonated most with German citizens, @ZeitOnline analyzed Twitter data to measure engagement. The “Twitter-Monitor”, produced in cooperation with a research project from the Centre for digital cultures at the University of Lüneburg and @Tame_it, also shows how the conversation around particular topics developed, and who was talking, whether it was politicians, journalists, organizations or voters. 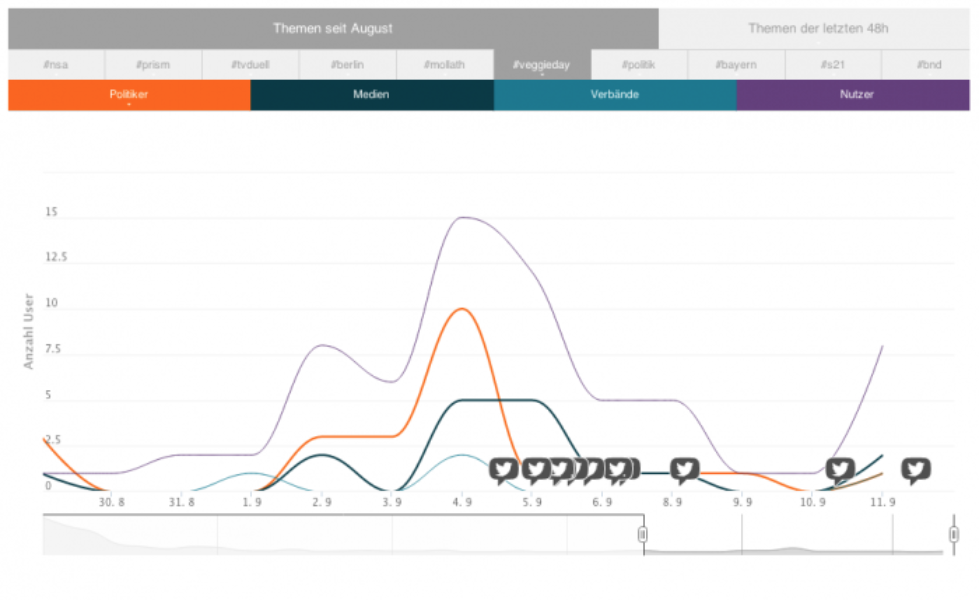 Twitter Q&As are another great way for politicians to interact directly with the voters and get real-time feedback about specific political issues. Several leading politicians took the opportunity to field questions from Twitter users during their campaigns:

These charts show how many times the leaders, parties and issues were mentioned on Twitter:

News orgs get creative with #btw13 and Twitter data
Online news sites and TV stations used Twitter as a real-time barometer, analyzing Tweets to measure how people felt about the topics being discussed by the parties and politicians in the runup to the election.

BILD, Germany’s largest newspaper, produced the BILD-Twittermeter, measuring positive and negative sentiment around the two candidates based on Tweets. 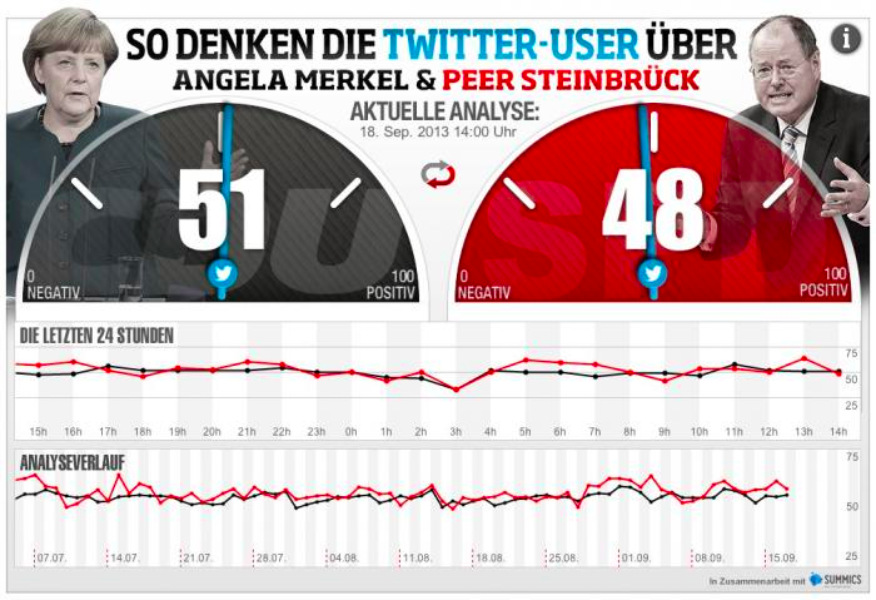 @PulseLive, a digital medial company, also created a real-time, interactive “Twitter Duell” and “Twitter Barometer” for both the debate and the election day, which was integrated on many of the major news sites, such as @SZ, @FocusOnline, @SpiegelOnline, @Welt and @DerWesten. 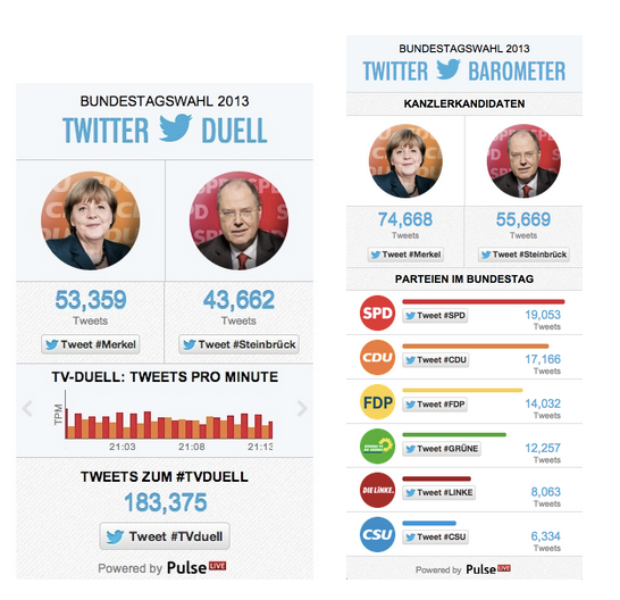 Vine was also used by the media in a number of creative ways during the election, such as this infographic that @ZeitOnline created comparing gross monthly incomes:

Citizens vote and tweet about it with #gehwählen
On election weekend, Twitter Germany (@Twitter_de) supported a “go vote” campaign encouraging users to vote and motivate their friends and followers by sending Tweets and Vine videos with the hashtag #gehwählen:

There were more than 27,000 Tweets with #gehwählen, including Tweets and Vine videos from celebrities, politicians and media:

Candidates express joy and despair on election day
When election day finally came on September 22, politicians and top candidates turned to Twitter to share their experience and encourage people to vote:

Once the first closing polls were released, leading politicians expressed their joy or disappointment. From top to bottom in the tweets below: Peer Steinbrück (SPD), Katrin Dagmar Göring-Eckardt (Green), Gregor Gysi (Die Linke):

While Chancellor Merkel won a resounding victory, her party did not manage to achieve the overall majority. Over the next few weeks there will be intense discussions between the parties — on and off Twitter — as they look to negotiate with the next government. Germans will no doubt stay tuned in to Twitter as the political action unfolds.