Last week, The New York Times (@nytimes) experimented with a new feature that highlights quotes and sentences within a story, and in one click turns those sentences into Tweets.

The story they chose, “The God of ‘SNL’ Will See You Now,” was about the process of auditioning with Saturday Night Live executive producer Lorne Michaels. Readers could roll their cursor over and click once, or if on a phone or tablet tap on highlighted text, and watch the Tweet box automatically open with that text ready to tweet. The preselected Tweet also included a link to the article that dropped anyone who clicked it to that exact spot within the piece.

Here’s an example from the story: 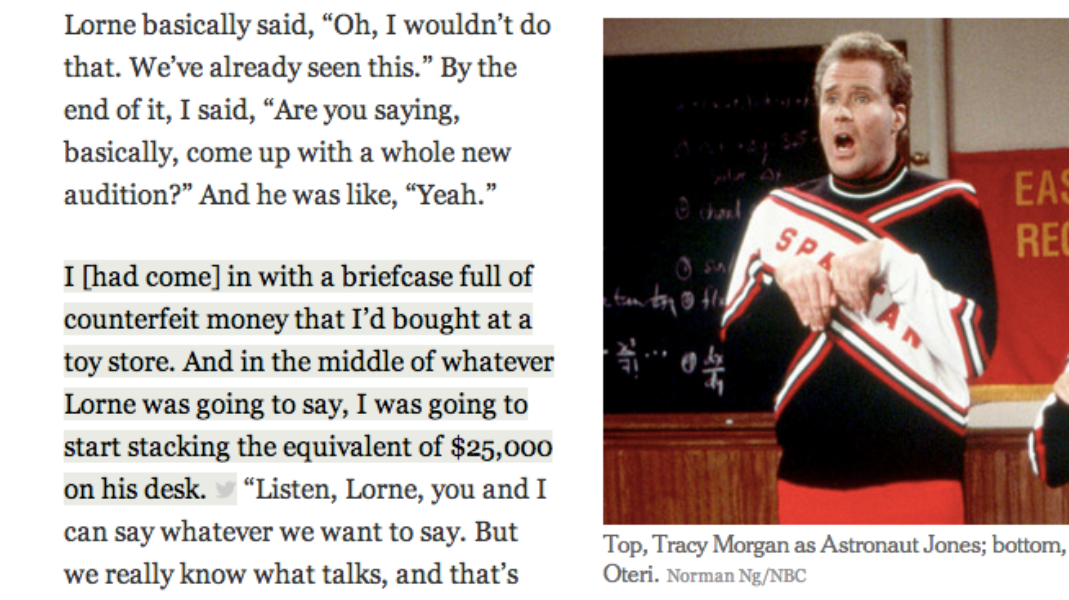 Used with permission from The New York Times.

As an example, see this Tweet from a reader, which refers to the Will Ferrell quote above:

What Will Ferrell planned to give Lorne Michaels during his SNL audition: http://t.co/OADCGvTWTR

The selections were made by Times editors to make it easier for readers to tweet a line they liked, rather than just the headline. “[We tried] to imagine what readers would be drawn to, and what would make the best traveling billboards for the overall story,” Deputy Editor of Interactive News Marc Lavallee (@lavallee) told Poynter.

Editorialized Tweets led to a significant increase in sharing on Twitter.

The SNL (@nbcsnl) story was tweeted 11 times more often that the average of the top 500 shared Times articles from the last month, according to data from Topsy.

Any news organization can, like the Times, embed inline Tweets. This widget from Save Publishing, for example, makes it easy for readers to tweet lines from any webpage. Add the Save Publishing bookmarklet to your browser, highlight text on a page, and then click on the bookmark to directly Tweet from within an article or webpage.

Do you know of any innovative uses of Twitter? Let us know at mediablog@twitter.com.