In May, we announced the beta release of a new product called TV ad targeting, which lets marketers continue the story of their TV advertising on Twitter. The results of the beta test reveal that the impact of using Twitter in combination with TV advertising is significantly greater than that of using TV advertising alone. So today, we’re pleased to announce the general availability of TV ad targeting in the U.S. to advertisers running national television commercials.

In our tests over the last few months with brands like Adidas, Holiday Inn Express, Jaguar, and Samsung, advertisers using TV ad targeting saw significant improvements to key brand metrics, such as message association and purchase intent (as measured by Nielsen Brand Effect for Twitter). During a handful of studies, users that Twitter identified as being exposed on TV and then engaged with a Promoted Tweet demonstrate 95% stronger message association and 58% higher purchase intent compared to users identified as being exposed on TV alone.

In addition to the results realized by these brands, we’re also launching a new set of analytics in our TV Ads Dashboard that extend the capabilities of the TV ad tracking analytics we introduced last month. With these new analytics (below), advertisers using TV ad targeting will be able to better understand what users on Twitter are saying about their ad campaigns. Advertisers will have direct and easy access to user feedback on TV creatives — feedback they can use to optimize their Promoted Tweet campaigns. 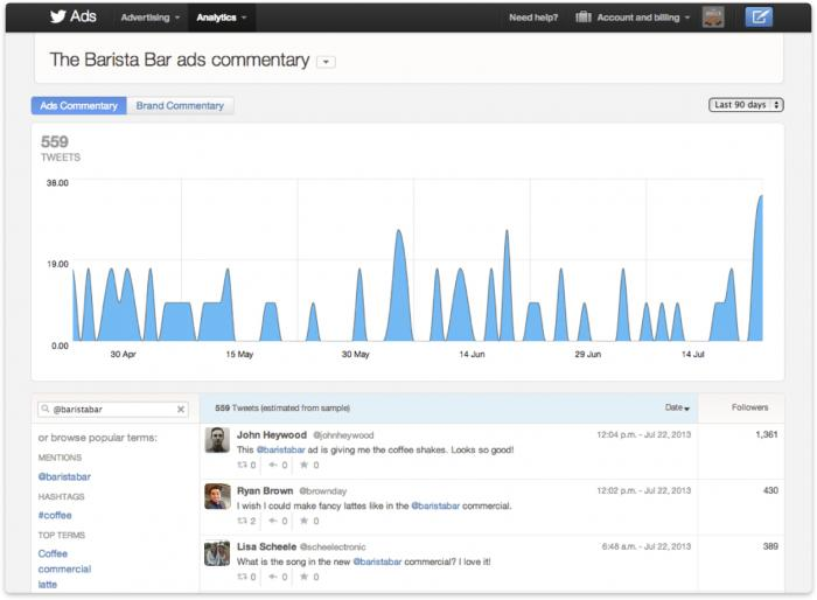 TV ad targeting provides an always-on solution that makes it easy for advertisers to continue the conversation they started on TV with a layer of interactivity and engagement unique to the Twitter platform. To get started, please contact your account team or visit business.twitter.com.

UPDATE: An earlier version of this blog post included an image with mock Tweets from real users of our platform. This was not OK. Once we became aware of this mistake we took it down immediately. We deeply apologize to the three users included in the earlier images.