Tweeting stories and donations for #GivingTuesday

#GivingTuesday was created as a day to celebrate and encourage people to give to charities on the Tuesday after Thanksgiving, Black Friday and Cyber Monday. But how does the campaign, in its second year, share its message and influence the public?

“We used Twitter to spread the word, encourage conversation and help establish the concept of #GivingTuesday,” said Henry Timms, interim executive director of New York’s 92nd Street Y (@92Y), the nonprofit cultural and community center that established the #GivingTuesday campaign (@GivingTues) through its partnership with nonprofits such as the United Nations Foundation (@unfoundation) as well as philanthropic organizations.

It’s 12am EST, which means … it’s officially #GivingTuesday! Get ready for an exciting day of GIVING!

Blackbaud, a software company that provides data and analytics to nonprofits, reports that the December 3 #GivingTuesday produced a 90% increase in online giving compared to last year’s event.

Here’s how Twitter’s involvement in the campaign helped it accomplish that feat.

Building around a hashtag
Going with the hashtagged campaign name was never a given. The organizers actually debated whether to include the hashtag or have it just be “GivingTuesday.” Timms said featuring the hashtag might have been the best decision they made.

“A hashtag isn’t just a classification; it’s a symbol of community, a sign that we share a cause with one another,” Timms said. “That sense of connectedness fueled #GivingTuesday from the start.”

People tweeted different stories about giving with the same hashtag, producing a community for giving on Twitter that was distinctive and powerful. Timms said there were 269,000 Tweets with the hashtag on December 3 — an average of 186 times per minute. The hashtag has been used more than 835,000 times since November 1, according to Topsy.

Promoting a cause
What started with the event organizers was quickly picked up by the nonprofits and advocates, who in turn promoted and branded #GivingTuesday to their constituents.

“We found a virality on Twitter that was really powerful,” Timms said. “Social media is the key to continuing the conversation, making #GivingTuesday more than just a moment.”

In the months leading up to #GivingTuesday, campaign leaders gave tips and resources on Twitter to help partners with their planning. They also created and shared a social media kit, featuring sample Tweets along with facts and figures from the previous year’s campaign. It was available for anyone to download on the #GivingTuesday website. This was critical to their success, as organizers at @92Y and elsewhere could not have reached the more than 10,000 partners worldwide all on their own.

On the days prior to #GivingTuesday, @GivingTues regularly tweeted out the names and handles of different charity and nonprofit organizations accepting donations.

Join us in welcoming @HCAPhi @Invisible and @American_Heart to #GivingTuesday!

Giving on Tuesday
On campaign day, people rallied behind the movement. @GivingTues, @unfoundation and @92Y tweeted all day to spread the word and revel in the giving.

Today is #GivingTuesday! @GivingTues was created by 92Y in spirit of tikkun olam (repairing the world). Stop by our lobby and check it out!

Organizations tweeted to bring awareness for their charity.

.@UNDPZimbabwe volunteered their time at a school for the disabled in #Harere. #GivingTuesday #UNselfie pic.twitter.com/kf4LbP8PEw via @UNDP

@GivingTues and @unfoundation shared those stories too, especially by retweeting messages and photos with the hashtag such as this one:

I gave to @WARLDC because every pup deserves a forever home. How are you celebrating #GivingTuesday? #getoutthegive pic.twitter.com/r3vZ70t6eB

“The goal of #GivingTuesday wasn’t to tell people what to do, but to create the context in which hundreds of thousands of people could tell their stories about giving,” Timms said. “Social media is creating an increasingly large appetite for participation and we all need to work out how to harness that for good.”

To build on the #GivingTuesday momentum, nonprofit blogger Beth Kanter (@kanter) took over the @unfoundation account in the afternoon to answer questions with the hashtag #askbethk.

Enlisting Twitter influencers
Another huge reason word spread about #GivingTuesday was promotion from influencers. Jonathan Greenblatt at the @WhiteHouse, for instance, has been supportive of the cause for over a year, according to Timms. The @WhiteHouse encouraged people to give in a blog post it tweeted out along with the hashtag.

“People everywhere can find their own ways to celebrate their common bond of community.” —> http://t.co/RpMb61Y7sY #GivingTuesday

However, lots of celebrities and influencers joined the movement organically, even on the day of. Celebrities and well-known people from Ellen DeGeneres (@TheEllenShow) to Kourtney Kardashian (@KourtneyKardash) to Bill Gates (@BillGates) tweeted about #GivingTuesday, providing additional reach and increased awareness to supplement the efforts of @92Y and @unfoundation.

Everyone knows about #BlackFriday & #CyberMonday. Now help me spread the word about #GivingTuesday: http://t.co/O65VPMnx

Organizers kept a running list of influencers who added their support, Timms said. This photo was taken at the end of the day:

Posing for an #UNselfie
One last aspect of the #GivingTuesday campaign was the idea of the #UNselfie, an unselfish “selfie” photo, as a way for people to share their reasons for giving and the causes to which they give. More than 7,000 Tweets with the #UNselfie hashtag were sent out over Twitter and other platforms.

Our Executive Director Chris Whatley & his daughters are participating in #GivingTuesday. Are you? #UNSelfie pic.twitter.com/olCGqjACgv

Here are some more numbers summing up #GivingTuesday. 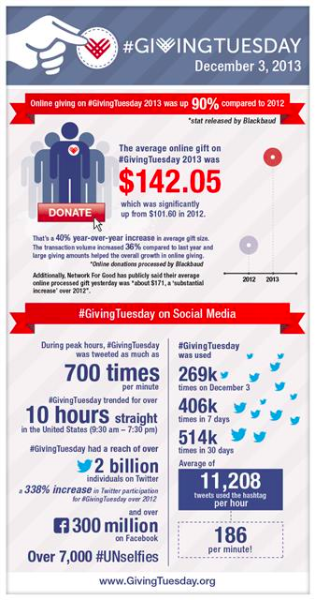