Tweeting the VMAs: The techniques that worked

@ladygaga and @mileycyrus weren’t the only ones grabbing the spotlight at the MTV Video Music Awards, as celebs, reporters and @MTV tweeted in ways not even invented a year ago.

Using tools like @vineapp and a tweeting mirror to bolster the lively #VMAs conversation, fans got an unprecedented glimpse into one of music’s biggest nights of the year. And the audience was there: as according to Social Guide, it was easily the most social program on TV yesterday - 18.5 million Tweets around the show, which was 90% of the conversation about TV. That is a 270% increase on the numbers Social Guide recorded last year - and the ratings were up 66% too.

While the VMAs aired live from Brooklyn, the conversation echoed around the world. Millions of Tweets came from as far afield as Brazil, Canada, Mexico, Spain, Argentina and the UK. Topsy, a social analytics company, estimated that about 10% of the total worldwide conversation and about 36% of total US conversation on Twitter about anything last night was about the VMAs. 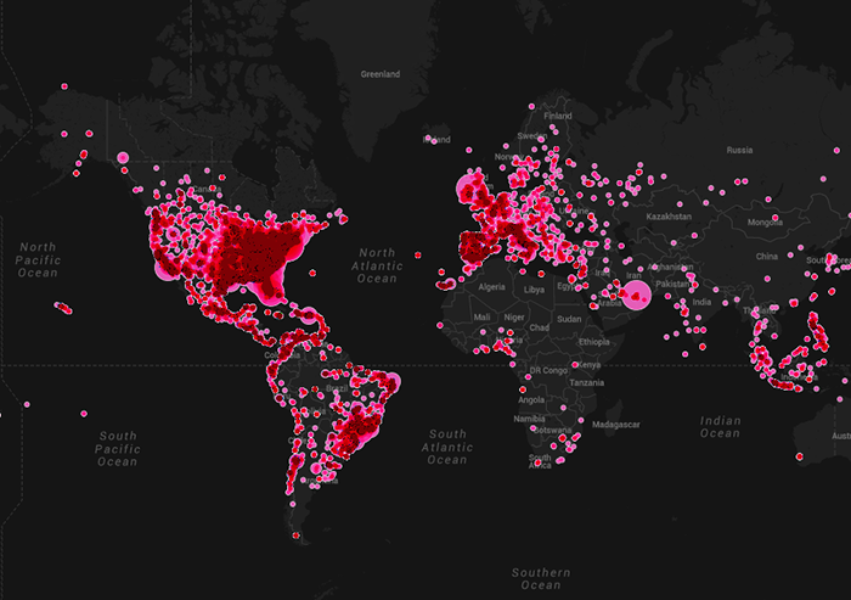 Click image to explore interactive map. Map made with CartoDB.

These are some of the top ways media outlets and celebs were using Twitter to amplify the conversation to all of these fans.

US Weekly, MTV took fans where they couldn’t go

Celebrity magazine @usweekly used Twitter and Vine to make its coverage real-time, with reporters posting red carpet & backstage photos, videos from the event itself, and a staple of any awards show — plenty of commentary. The team even made Vine videos a big part of the team’s VMA hub:

The strategy worked: @usweekly earned its highest numbers of mentions in the past month by giving fans a look at what they weren’t seeing anywhere else.

@UsWeekly earned its highest numbers of mentions in the past month by giving fans a look at #VMA news they weren’t seeing anywhere else.

Meanwhile, @MTV gave fans a backstage pass by posting Vine videos and behind-the-scenes photos from a Twitter mirror throughout the night — and the stars threw themselves into it, including Selena Gomez (@SelenaGomez), Joseph Gordon-Levitt (@hitRECordJoe) and Jimmy Fallon (@JimmyFallon):

Twitter data shows that Vine videos encourage some of the highest retweet and engagement rates, and the Vine star of the night was Nicholas Megalis (@NicholasMegalis). Known for his quirky six-second videos, Megalis has become a fan favorite on Vine with over 2m followers. Last night he gave his followers the experience of mixing with the stars.

Gaga, Styles built up the anticipation

The conversation on Twitter can start before a big event, and while Gaga opened the show in typically outrageous fashion for TV viewers, her followers had already gotten a sneak peek.

And this Tweet by One Direction (@OneDirection) star Harry Styles (@Harry_Styles), posted before the event started, became one of the most retweeted of the night:

Before the VMAs had even started, musicians and celebrities were eagerly anticipating it on Twitter. Challenge: Rivals II reality star Diem Brown (@DiemBrownMTV) grew her follower base by asking fans to help her choose between two looks for her first VMA red carpet:

One of the most anticipated moments of the show was Justin Timberlake’s (@JTimberlake) reunion of NSYNC. And the band used Twitter to bring fans with them before, during and after the show.

The day before the VMAs, the band opened a Twitter account (@NSYNC), which immediately gained thousands of new followers.

Mic check, mic check one.. two… is this thing on?!

That reunion proved to be one of the highpoints of the night - with even Gaga excitedly tweeting it as it happened.

And when it was all over, the band saved the moment for posterity on Twitter.

What a night! Thanks for all the support everyone. We love you so! #NSYNC pic.twitter.com/IqTVccjti2

It’s here, internet! Watch the @NSYNC @JTimberlake #VMAs reunion over and over and over: http://t.co/lgAYzTMsQM

I think I just caught my breath… That was an unforgettable night for me. Thank you forever, @MTV

Katy Perry (@KatyPerry) closed the show dressed as a boxer with a performance of her new track #Roar from under the Brooklyn Bridge. And even @Oprah took notice, tweeting at her in real time. After Katy had thrown her last punch, she tweeted back at Oprah to keep the conversation going.