In September, we launched Twitter Alerts to help people receive critical information during times of crisis. Since then, Twitter Alerts has grown to include countries and organizations around the world.

By enrolling in Twitter Alerts, an organization can push an Alert to users’ phones during an emergency, natural disaster or whenever other communication services aren’t accessible. Twitter Alerts now have participating organizations in the U.S., Japan, Korea, UK, Ireland, Australia and Brazil.

We’ve also added some new features to make Twitter Alerts even more accessible to you. Now, on your iOS or Android app, you can go to a participating organization’s profile and easily subscribe to their Alerts as push notifications by tapping on the bell icon. We also added in-app notifications for iOS: when you’re browsing on Twitter you’ll now receive a notification at the bottom of your screen when an alert is sent by an organization whose Alerts you subscribe to. 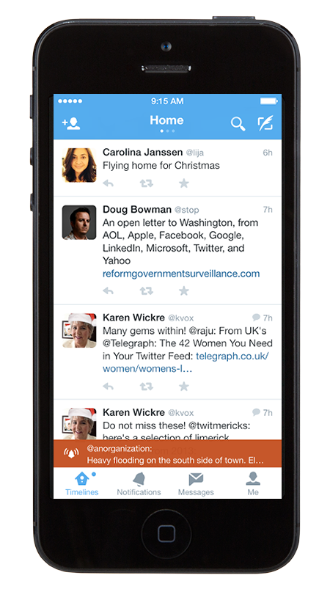 This week, organizations in Brazil and Australia joined Twitter Alerts. In Brazil, people can now choose to receive alerts from Centro de Operações da Prefeitura do Rio de Janeiro (COR), which integrates data from around 30 entities including municipal and state departments and essential services. In Australia, there are more than a dozen participating organizations, including the City of Sydney, the Australian Red Cross, the Department of Health, and fire and police departments from several municipalities.

In the UK and Ireland, 57 organizations are participating in Twitter Alerts, including the UK’s 47 police forces, An Garda Síochána, the London Fire Brigade, the Mayor of London’s office, the Foreign Office, CEOP and the Environment Agency. During a recent period of extreme flooding, several of these issued Twitter Alerts to share urgent safety information with citizens:

Even if you don’t see your country on this list, there may be Alerts-enabled organizations relevant to you, such as those that post travel warnings or public health updates: