For B2B marketers, lead generation is often both a top priority and a top challenge. We know from previous studies that Tweets influence consumer shopping behavior, but how do they affect the busy business decision maker? We specifically wanted to understand how a Tweet influences the B2B tech audience, so we partnered with Compete (@Compete) for this “Tweets in Action: Mobile/Tech” study and found that exposure to Tweets drives site traffic, increases brand search and influences conversion.

Compete observed the site visitation behavior of more than 6,000 US users to 400+ B2B tech sites from mid-November through December of last year. The study looked at three different groups of users to understand the impact of their exposure to Tweets. The test group consisted of people who saw at least one Tweet from a B2B tech company. The control groups were made up of similar sets of users who did not see a B2B tech Tweet. One was comprised of Twitter users and the other was representative of the average Internet user.

Key findings from the study

1. Twitter users who see Tweets from B2B tech brands are more likely to visit the sites of these brands.

The study found that Twitter users visit B2B tech brand sites at a higher rate (59%) compared to average Internet users (40%), illustrating the strong presence of a B2B audience on Twitter. 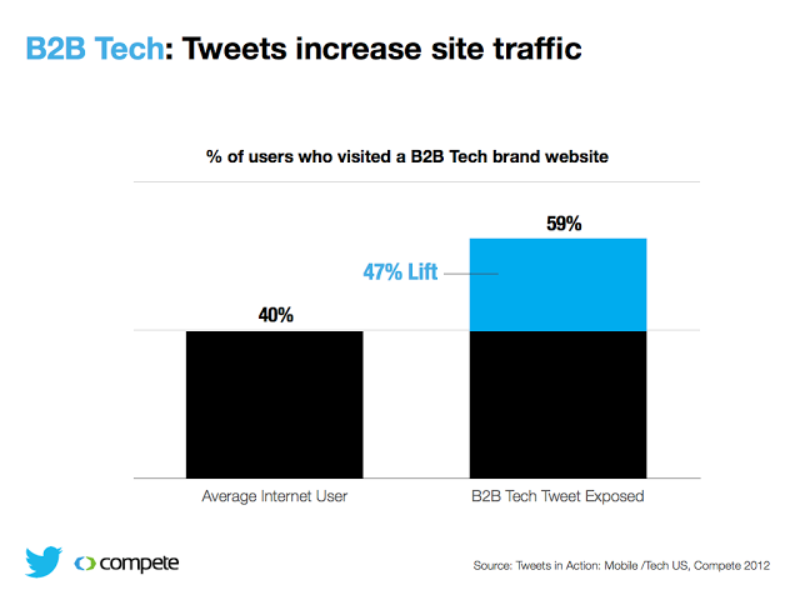 Advertiser takeaway: Twitter is a great place to connect with business decision makers at all levels of the funnel as they use Twitter to learn, research, and connect with their interests on an ongoing basis.

Twitter users search for B2B tech brands at a significantly higher rate (30%) compared to average Internet users (12%). In other words, Tweet exposure has a positive influence on brand consideration. Advertiser takeaway: Make it as easy as possible for users to find what they’re looking for on your site. Include deep links to relevant content in your Tweets, whether it be a product demo, your latest and greatest whitepaper or an upcoming event sign-up page.

The impact of Tweet exposure is even more noteworthy on lead generation than site visitation, suggesting a correlation between Tweet exposure and lead quality. Twitter users visit a B2B tech company’s site with a higher likelihood to convert. While 4% of average Internet users completed sign-up on a B2B tech site, Twitter users converted at more than double the rate (11%). 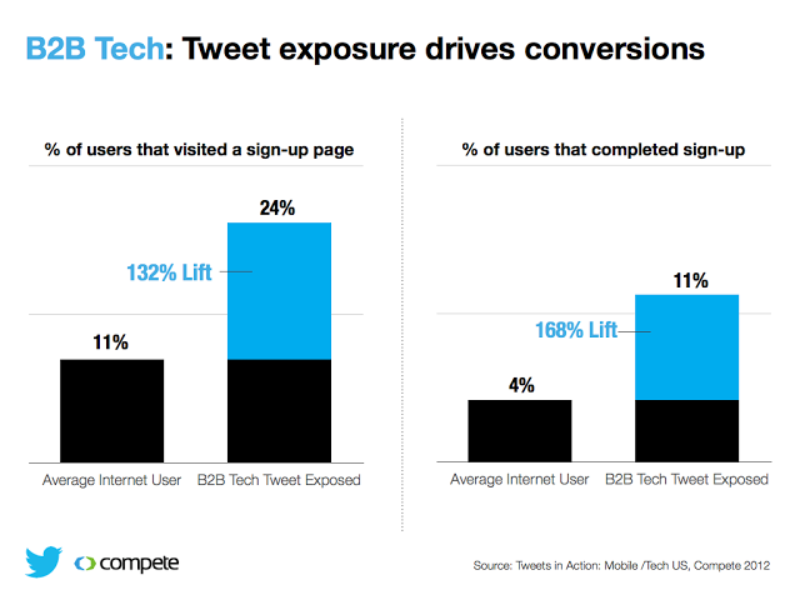 Advertiser takeaway: Tweet exposure not only increases site traffic and influences brand consideration, it also drives leads for B2B tech companies. In addition to offering educational resources to your audience, consider including specific calls-to-action with incentives to encourage sign-up.

Business decision makers are engaging on Twitter. B2B customers and thought leaders use Twitter to discover information and share content. This offers B2B marketers a unique opportunity to connect with this audience, build relationships and influence their decisions – all in real time.

Learn more from B2B advertisers who have found success on Twitter: