It may take place in a small corner of SW London, but what happens during @Wimbledon is echoed across the world on Twitter.

When Scottish player Andy Murray won the men’s singles title and tweeted the post above, it became a hugely popular retweet and was also embedded on news sites as diverse as the Bleacher Report, The Sun, The Washington Post and the Huffington Post. 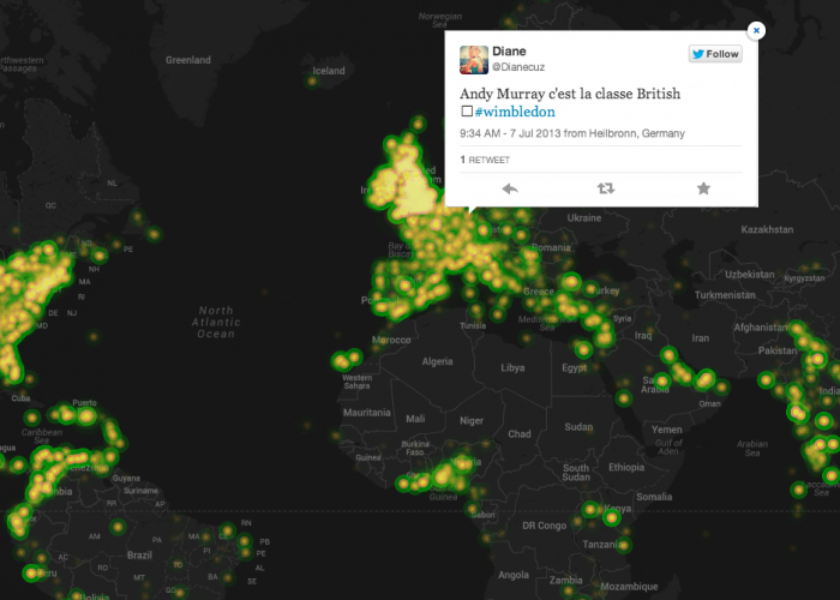 This map, made with mapping tool CartoDB shows the location of every geotagged Tweet made during the two week tournament mentioning [Wimbledon]. Geotagged tweets illustrate how the tournament is discussed on Twitter in various locations around the world. In fact, if you compare Tweets to the population as a whole, the audience for Wimbledon is truly global.

These numbers represent Tweets over the whole championship, compared to population. Although the UK was very much in the lead, people on Twitter were talking about Wimbledon in places as far-flung as the US, Argentina, and even the United Arab Emirates. SocialGuide, which ranks TV programs based on the amount of social chatter about them, measured 962,838 Tweets in the US alone around the final. The event was ranked the most-social program on TV all day, despite the timing (broadcast at 9am ET on a Sunday morning). And this Tweet from @SportsCenter was the most retweeted in the US during the game:

HISTORY IS MADE! Andy Murray defeats Novak Djokovic in straight sets to become 1st British man to win Wimbledon since Fred Perry in 1936.

The Wimbledon organization tweeted continuously throughout the two week event, posting 2,634 tweets from June 24 to July 7.

The @Wimbledon account posted 31 Tweets containing photos and 21 including videos — and, laudably, mentioned other Twitter accounts in 40% of its Tweets or 962 times, often with instant facts and figures from the matches.

This chart shows how many times some of the best-known or most-successful players at Wimbledon 2013 tweeted during the championship.

Murray tweeted often during the matches (presumably not while he was actually playing…), and demonstrated that he knows how to increase engagement: A quarter of his Tweets were in reply to another Twitter user, and he also tweeted images and links.

Further, he was not alone. His competitor in the final, Novak Djokovic, also tweeted often during the games, with an even higher percentage of his Tweets in reply to others on Twitter, as he engaged with fans, friends, and other athletes.

For example, #AskDjoker asked fans and celebrities alike to put questions to Djokovic, and they did. Actors Kevin Spacey (@KevinSpacey) and Jeremy Piven (@JeremyPiven) posted questions via video.

Just put my Q&A with @DjokerNole on @YouTube for anyone that missed it http://t.co/Y5x7WffVtM #AskDjoker @Wimbledon

This led to a boost in followers for players such as Murray, Djokovic, and Marion Bartoli, winner of the women’s singles, who got a 500% increase.

It also highlights how popular Djokovic is on Twitter. He may have lost the title but he has — for now at least — won the follower war.

Have you done anything with data from Wimbledon? Email us at mediablog@twitter.com.