Recently we launched Twitter Alerts, a new emergency alert feature that provides critical information to citizens during a fast-moving crisis situation or when other communication services aren’t accessible. In the past two weeks, we’ve seen several cases that demonstrate how the Twitter Alerts feature can be used during a wide variety of emergencies involving public safety, accessibility and bad weather.

As news of a runaway car and shooting broke and the “shelter in place” order was issued, the Senate Sergeant at Arms, responsible for security and safety at the U.S. Senate, sent out a Twitter alert.

As the situation unfolded, the office continued to tweet critical updates via alerts and organic Tweets, providing additional details and helping people to prioritize urgent information.

New York Amber alert
New York’s Office of Emergency Management (@NotifyNYC) used the feature when issuing an Amber alert, which are are typically sent out on public channels. Twitter Alerts offer another avenue to reach citizens.

State of Louisiana test alert
The Louisiana Governor’s Office of Emergency Preparedness (@GOHSEP) sent its first alert as a test:

Test of the @GOHSEP Twitter Emergency Alert System. THIS IS ONLY A TEST. #alert

Storms in New Jersey
And as seasonal tornadoes moved up the east coast, the New Jersey Office of Emergency Management (@ReadyNJ) alerted subscribers that a statewide tornado watch was in effect and to be prepared.

Tornado Watch in effect for all of NJ. Be prepared to act quickly if warnings are issued by NWS. http://t.co/bLiQJE5qyb #alert

By adding the Twitter Alerts badge, the agencies and organizations can reach users who subscribe to the service to receive Tweets delivered by push and/or SMS. The Twitter Alerts designation stands out on a user’s timeline, indicated by an orange bell icon.

Here’s how an alert appears via SMS message and push notification: 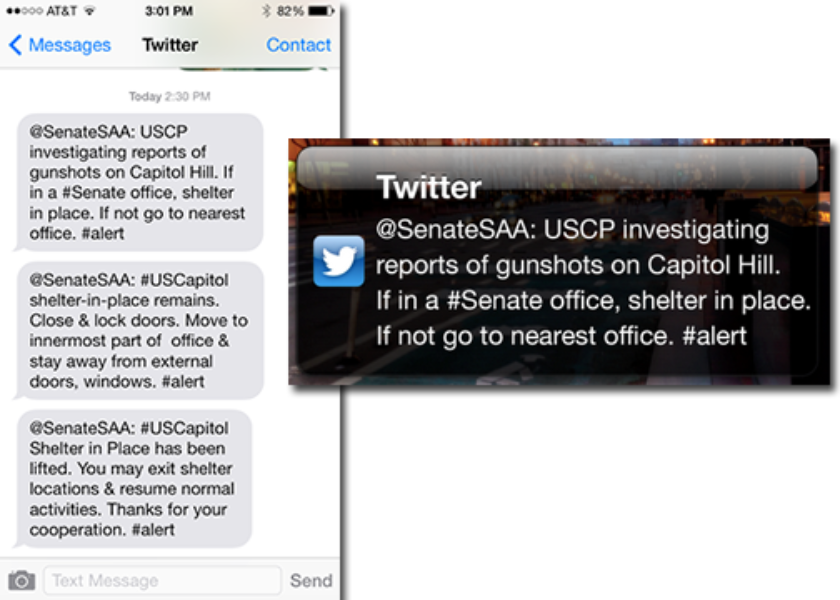 Who can participate
The Twitter Alerts program is available to local, national and international institutions that provide critical information to the general public. These entities have priority access:

Currently, more than 100 NGOs and government agencies in the U.S., Japan and Korea can send alerts. we are expanding the service to include more organizations around the world. If you believe your organization qualifies for the Twitter Alerts program, please complete our enrollment form.