As commercial television programming takes the stage this Sunday at the Emmys (@PrimetimeEmmys), our own Nicolas Belmonte looks at Twitter activity around Emmy-nominated shows.

A member of our Visual Insights team, Nicolas created a visualization of 39 million Tweets around shows nominated for the prestigious awards this Emmy season: 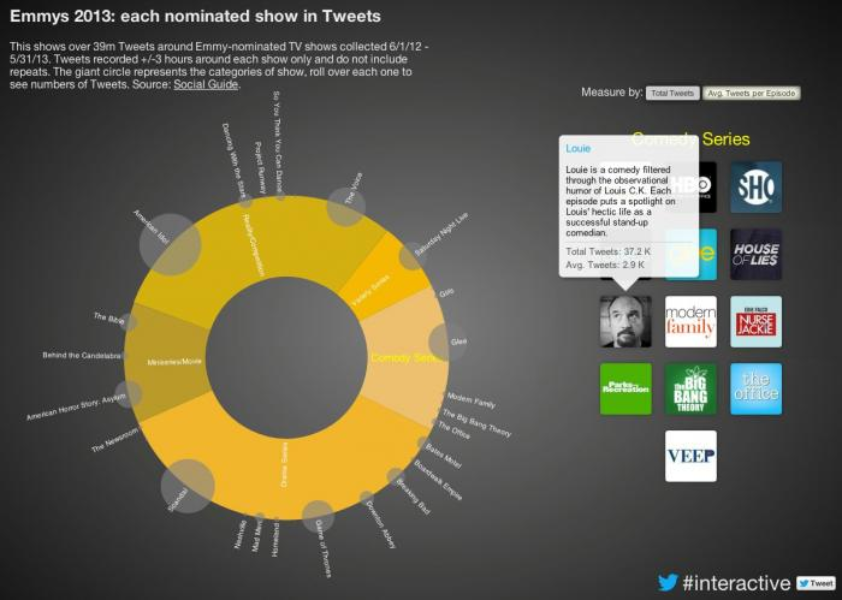 The data comes from SocialGuide (@Social_Guide), which measures Twitter conversation around TV — and it just shows the tweets +/- 3 hours around a show, so it’s actually just a portion of the millions of Tweets around TV. It shows what happens when programs engage with Twitter to harness the real-time conversation taking place as fans tune in. So, for example, when Breaking Bad (@BreakingBad_AMC) star Aaron Paul (@aaronpaul_8) tweets:

Dear everyone, If you want to poop yourself watch Breaking Bad tonight. Thanks. Love, Ap

… or @BlakeShelton tweets during @NBCTheVoice (this is the most-retweeted Tweet around an Emmy-nominated show this season):

Does anyone else feel robbed that Judith didn’t make @adamlevine light himself on fire like he said he would? #bunchacrap #VoicePremiere

… it all helps to spark the social conversation around the show.

These 39 million Tweets were collected by SocialGuide around these programs during the Emmy eligibility period from May of last year to mid-June this year. SocialGuide records all the Tweets around a show from three hours before it starts to three hours after it finishes — and this data does not include reruns. While 39 million Tweets may sound like a lot, it’s actually just 4% of all the Twitter conversation SocialGuide recorded around TV over the year.

Have you seen any interesting visualizations around Twitter data? Email us at mediablog@twitter.com.