A new way to promote mobile apps to 1 billion devices, both on and off-Twitter

We are excited to announce new ways for marketers and developers to drive app installs and app engagements using our new mobile app promotion suite: both on Twitter and off-Twitter through thousands of mobile apps that use MoPub’s mobile advertising exchange.

This offering gives marketers unparalleled scale across the mobile ecosystem. The MoPub Marketplace reaches more than 1 billion unique devices and handles more than 130 billion ad requests inside Android and iOS applications every 30 days, making it one of the largest mobile ad exchanges in the world. Advertisers can now choose to run simultaneous marketing campaigns to more than 241 million active users on Twitter, and to more than 1 billion mobile devices off-Twitter, through one interface at ads.twitter.com.

We have developed a full suite of targeting, creative and measurement tools to enable Twitter advertisers to effectively promote their mobile apps. These are being tested in a private beta, and you may have already seen some examples of these app promotions on Twitter. For marketers, this means a rich, native ad unit that combines the best of Twitter Cards and Promoted Tweets. Users can easily install and engage with apps, directly from the Twitter timeline. 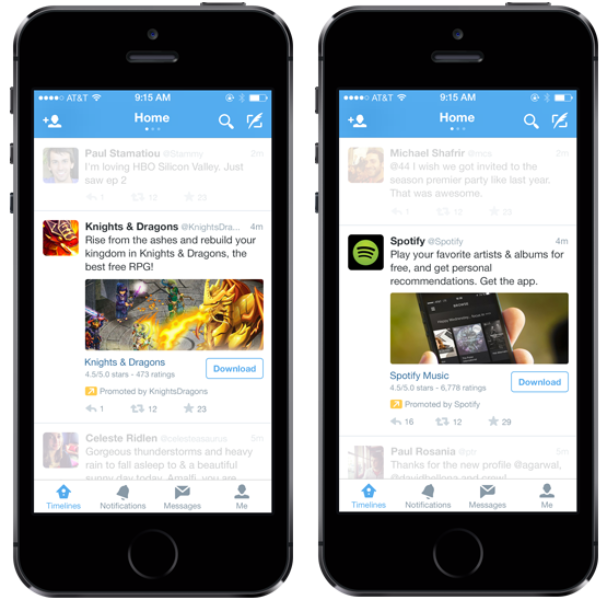 Some of our early beta partners, including Spotify, HotelTonight, Kabam, and Deezer have seen promising results from the initial tests.

Another beta partner is SeatGeek, a popular ticket search engine, has been testing some features in the mobile app promotion suite. Their take so far:

“We’ve been very impressed so far with the performance of our mobile app install campaigns on Twitter,” said Russ D’Souza, co-Founder at SeatGeek. “Our campaigns to date have consistently yielded high-quality, transactive app users, which is more than can be said about the vast majority of mobile ad platforms out there right now.”

GREE, another beta partner and major mobile game developer, had this to say:

“We know that a lot of our players (or potential players) are on Twitter making it a great place to reach and engage those users,” said Sho Masuda VP of Marketing at GREE. “The initial results of the program have been very strong and we are looking forward to rolling it out on a larger scale.”

GetTaxi, a leading consumer taxi app, had this to share:

“Twitter has jumped to be our number one acquisition channel, we couldn’t be happier with the results of the Beta,” said Rich Pleeth, VP Global Marketing at GetTaxi. “The engagement rates are remarkable, not only have we seen stellar results, but we’ve learned some great insights.”

Advertisers can now set up campaigns directly on ads.twitter.com to run across the Twitter Publisher Network, which is comprised of the thousands of apps and over 1 billion monthly devices the MoPub mobile advertising exchange reaches. Advertising campaigns run across the Twitter Publisher Network are automatically translated into programmatic bids on the MoPub exchange, on a level playing field with MoPub’s existing DSP partners. This is now available to U.S. advertisers in a private beta. Combined with the targeting and measurement features in the mobile app promotion suite, this affords advertisers the ability to easily run on-Twitter app promotion via Promoted Tweets, while simultaneously running off-Twitter advertising via the MoPub Marketplace.

Example of a Kabam ad on The Twitter Publisher Network

We are excited to offer new ways for marketers and developers to drive mobile app installs and app engagements, using Twitter Cards and Promoted Tweets on Twitter, and leveraging the scale of MoPub and the Twitter Publisher Network across the rest of the mobile ecosystem. This is the first of many opportunities to join Twitter and MoPub to create a large-scale, rich and well-targeted advertising platform — one that provides high ROI for marketers, and a great experience for users.