As the greatest tennis players in the world congregated in New York City, the 2014 @usopen proved to be another memorable chapter in its storied 119-year history.

While a familiar champion claimed victory in the Women’s bracket, a surprise contender won the Men’s title. And as tennis fans have come to expect, every dramatic moment of Grand Slam action was captured on Twitter.

As the world witnessed @SerenaWilliams take home her third-straight @usopen title and 18th Grand Slam overall, fans from all corners of Twitter – athletes, musicians, actors/actresses – were moved to congratulate the living legend:

The outpouring of support compelled Serena to express gratitude toward her fans in response:

The Men’s bracket hosted its share of excitement throughout the tournament as well. After Novak Djokovic (@DjokerNole) beat his longtime friend and rival Andy Murray (@andy_murray) in a grueling, late-night match, he turned to Twitter to wish his fellow competitor well:

Five-time US Open champion Roger Federer (@rogerfederer) also used Twitter to address his fans after being upset by Marin Cilic (@cilic_marin), who would go on to win his first US Open championship:

Widespread coverage from @usopen, athletes, sponsors and fans generated significant conversation on Twitter during the tournament, with over 2.8 million Tweets sent about the @usopen.

Here are the moments that sparked the top Tweets per minute (TPM) peaks during live, televised #usopen matches: 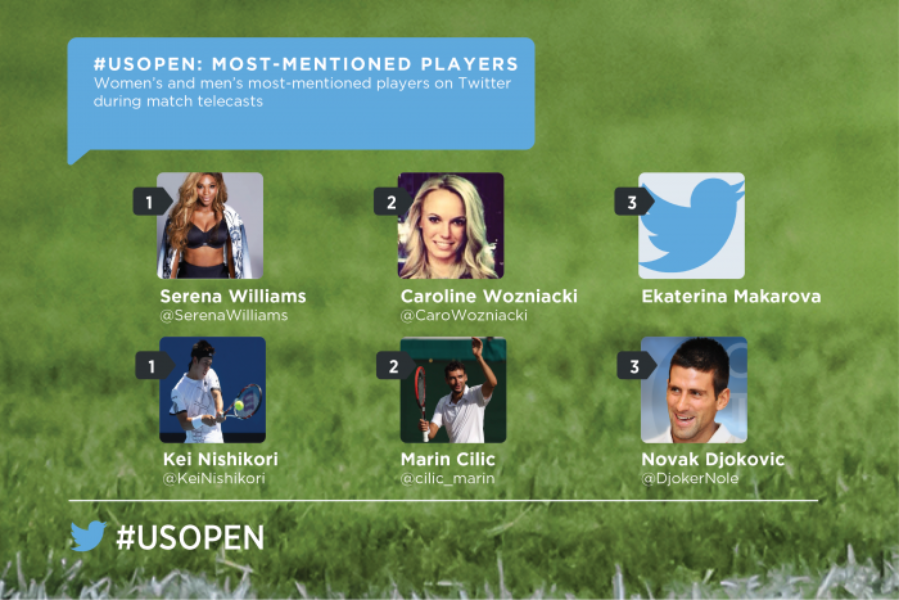 In addition to being the final Grand Slam of 2014, the @usopen is a star-studded event. This year we saw the interactions and thoughts of several high-profile guests captured on Twitter.

The official handle of the event (@usopen) also captured the celebrity buzz on-site by hosting a Twitter Mirror and Vine 360 Booth. Exclusive content was pushed out consistently throughout the competition, delighting fans on Twitter with behind-the-scenes access to the famous “Blue Carpet”:

Celebrities weren’t the only ones in the spotlight during the two-week tournament.

@usopen leveraged a Twitter Amplify program to ensure that all of the biggest on-court moments were captured on Twitter in near-real time.

Additionally, @usopen hosted player Q&As exclusively on Twitter throughout the tournament, giving fans the chance to engage with their favorite contenders between playing days.

Finally, the @usopen’s #StoryOfTheOpen billboard in New York City proved to be a big hit throughout the tournament. Fans and press took notice as artist Josh Cochran (@joshjcochran) used a New York City billboard to visualize social media conversations every day from August 25 until September 8:

Whether you were playing on the “Blue Carpet,” enjoying the games onsite, or watching at home, Twitter was your home for all the @usopen action in 2014. The tournament closed the book on another exciting year of Grand Slam tennis, and we look forward to more around-the-globe tennis coverage in 2015.