Arby's: Always-on listening, engagement our secret to success on Twitter

It starts with what our customers are saying.

Social listening is the foundation to our approach on Twitter. As our new CMO Rob Lynch says, “Our guests engage with our brand via social media in real time and around the clock. We need to be constantly listening for opportunities to jump in and join the conversation.”

That’s why we monitor brand terms closely and watch real-time trending topics. We notice when there’s a high volume of Tweets about turnovers during an NFL game and are ready chime in at the right moment.

All these turnovers have got us craving …. turnovers. pic.twitter.com/mODLSXwg1b

Or jump in on popular memes with a playful message that keeps us top of mind.

Or surprise people who mention us with a response to show we’re always listening.

@DragonflyJonez Actually, we had to release him. He kept making too many turnovers. ;-)

We’ve even dedicated a room to social listening at our headquarters with a team constantly looking for opportunities to engage and respond. 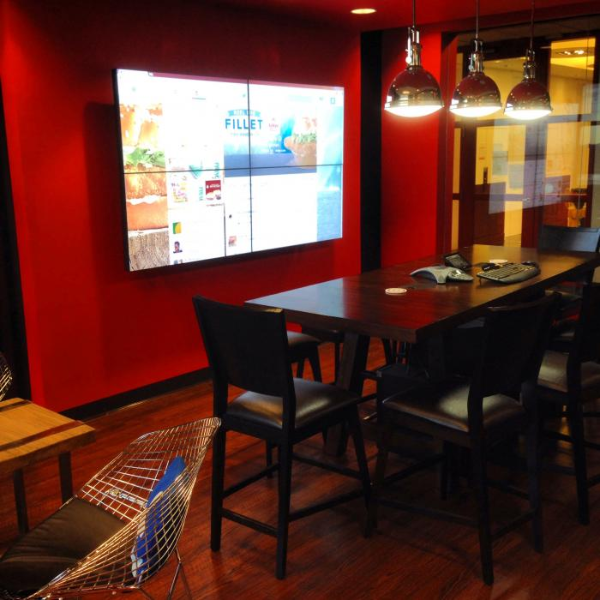 At this point, everyone is familiar with our Tweet about Pharrell’s hat during the Grammy’s but they may not know it happened because we were listening.

Hey @Pharrell, can we have our hat back? #GRAMMYs

The Grammy’s is not typically an event that our brand jumps in on. We don’t set up a war room for it. But we were monitoring brand terms on Tweetdeck at the beginning of the show.

Early on, we saw Twitter users connecting Pharrell’s hat with our logo. And we seized the opportunity to join in. It was very organic response that just resulted from simply paying attention to what was already happening on Twitter.

The impact of that one Tweet is mind-blowing. Our PR firm estimates that the advertising equivalency would be 84 million impressions with a $22 million price tag. It’s even outpaced engagement on Oreo’s Super Bowl Tweet. It was our “Dunk in the Dark” moment.

We’ve kept the conversation going during other TV moments like the Beatles 50th anniversary show where (thankfully) Pharrell wore the hat again and during the All-Star NBA game.

Looks like we’re never getting our hat back… #Beatles50

We told @Pharrell if he was going to continue to wear our hat, he should at least wear a red one. #AllStarGame

On the night of the Oscars, @Arbys officially got its hat back after placing the winning bid on Pharrell’s auction of his hat.

.@Pharrell You’re welcome. We’re HAPPY to support a great cause & get our hat back. Good luck at the #Oscars tonight! pic.twitter.com/2oA7qDPX9z

Since The Arby’s Foundation aims to improve the lives of youth by ending childhood hunger in America, it was a natural fit for us to make a donation to Pharrell’s charity called From One Hand to Another, which provides art and educational resources to youth.

While @Arbys is still determining exactly where the hat will go next, we’re looking forward to future opportunities to work with Pharrell and his foundation to raise visibility for our shared causes.

How to empower marketing in the moment

There is no other platform that provides the customer insights that Twitter does. You can instantly tap into the pulse of the conversation around your brand. It’s an invaluable resource.

But an organization’s approval process often dictates what marketers can do with those insights in real time. That means as marketers we have to create consistency and establish rules of the road internally.

From the beginning, I established clear brand voice guidelines. We keep the tone of all our Tweets fun, humorous and playful. We also have strict guardrails around what we participate in and what topics are off limits.

The result? There’s no onerous approval process. We have a core team that includes brand, legal, customer relations and public relations who are all on the same page. We do a lot of advance planning but we’ve also built in enough flexibility to make decisions in the moment that matters most.

Invest in amplifying your reach

When I started at @Arbys, we had 32,000 followers. We’ve steadily invested in Twitter Ads to grow that base and to connect with all the Arby’s fans out there. After all, if you have a small number of followers, the odds of your content going viral aren’t great.

In 2013, we saw a 300% year over year increase in our followers thanks to Promoted Accounts.

Never underestimate the power of reaching more of the right people. That’s where Promoted Tweets pick up: they help us maximize engagement with our customers.

We typically monitor the performance of organic Tweets and promote the ones that get the most engagement. We keep the tone and content in our paid Tweets similar to what we share organically. If a Promoted Tweet feels like a natural part of the conversation, we see Twitter engagement and shares go through the roof.

Most recently, we’ve had tremendous success with TV ad targeting. With our brisket sandwich launch, we were able to take our TV ad and directly extend the message to a second screen.

You can’t force real time. We just try to be timely and authentic.

We’re also willing to test and learn and optimize. That’s how we’re honing in on what works for our audience.

We’re seeing higher and higher return with every campaign. So we plan to continue to invest in what works. And you can be sure we’ll keep listening on Twitter – you never know who else might start wearing a crazy hat.