Last November, The Atlantic reported that only 39 percent of public schools in the U.S. are fully equipped with wifi. As a resident of what is frequently said to be one of the most wired cities in America, I was surprised to learn that some public schools in our home town of San Francisco, and even in our own neighborhood, lacked wifi access. For example, the Bessie Carmichael/Filipino Education Center school, just blocks from our office, could not fully leverage today’s digital learning technologies and tools that can empower youth, teachers, and parents.

For Twitter, providing digital access is central to our mission. Through our platform and through our Twitter for Good program, we want to overcome the digital divide and promote widespread access, adoption, and use of the Internet.

In a ceremony on January 19 with students, teachers, and community members, Principal Gotanco welcomed us into the Bessie family and gave our head of public policy Colin Crowell a “BC” baseball cap as a token of appreciation. Colin, a Boston College (that would be BC, of course) graduate, was pleased to have this reminder of our connection with Bessie Carmichael. 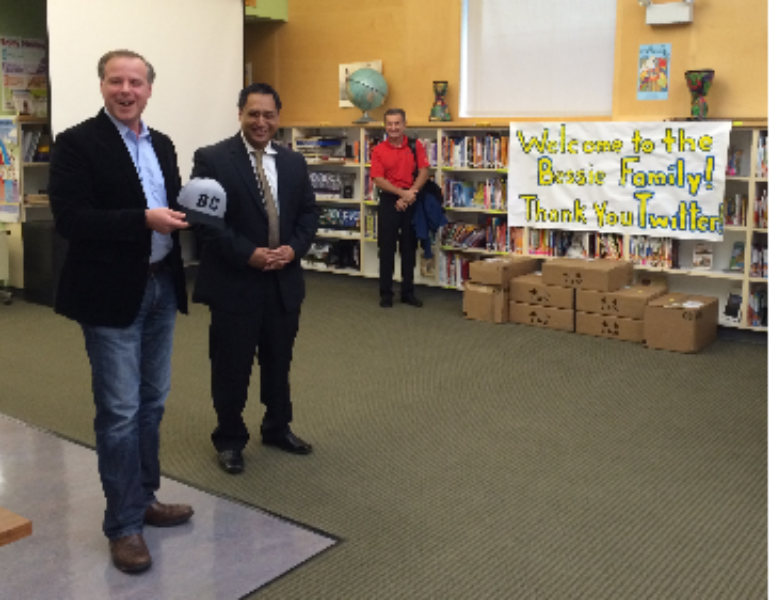 As the Community School Coordinator for the Bessie Carmichael/FEC K-8 school, I am charged with getting crucial resources for the students, teachers and families in the Bessie community.

The very first thing that Principal Lawrence Gotanco asked me to obtain was routers. His dream was to make all of Bessie Carmichael/FEC wireless. His dream came true thanks to Twitter.

It is inconceivable that Bessie Carmichael/FEC is located so very close to the big name tech companies, but had yet to enter the 21st century. Bridging the digital divide has long been a push in SFUSD. However, how can a school with the highest student population of homelessness possibly expect to close that divide? Twitter made Mr. Gotanco’s dream a reality.