During the 2014 FIFA #WorldCup, American fans flocked to @USSoccer for inside information, humor and unmatched access to the U.S. squad. As a result, the team gained over 465,000 followers during their exciting tournament run in Brazil. 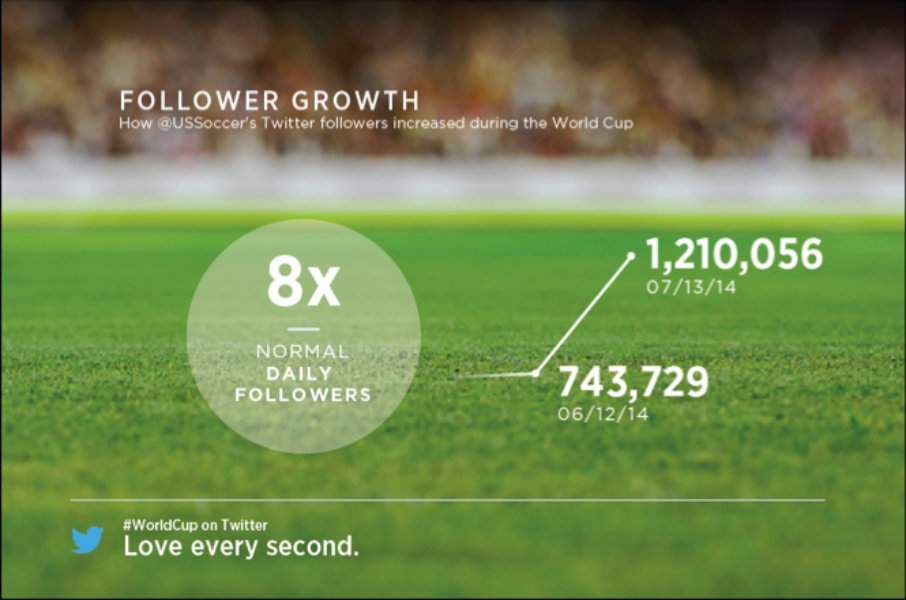 While fans enjoyed the entirety of @USSoccer’s efforts, one initiative stood out among the rest: the custom jersey campaign.

U.S. Soccer, in collaboration with Twitter and ecosystem partner Digigraph, sought to execute an innovative fan program with two key goals in mind:

As noted by USA Today, @USSoccer’s most loyal fans were rewarded with a virtual customized jersey that features fan @usernames (which could also be purchased on their merchandise site), and a digital thank you note from U.S. Head Coach Jurgen Klinsmann (@J_Klinsmann)

Here’s how the step-by-step user experience took place on Twitter:

The campaign flight was strategically aligned with the U.S. Soccer team’s schedule (June 13-16; June 20-23; June 30 to July 1). Capitalizing on peak fan interest, the limited 1-3 day pre-match engagement window would create a sense of urgency for fans to engage with @USSoccer before cheering for their team.

To maximize the full viral potential in a short window of time, however, @USSoccer needed to expand beyond its organic Twitter reach. The organization tapped into other areas of influence by empowering celebrities to act as program ambassadors. Doing this ensured the campaign would reach a broad section of American soccer fans — both avid and casual:

While the distribution plan helped garner an impressive reach for the campaign, the engagement metrics established the digital jersey campaign as a true success: over 120,000 fans received a customized jersey and each jersey Tweet averaged about 10 views (1.2 million total impressions). The campaign helped #USMNT become the uniting hashtag for the team, racking up over 2 million total mentions during the tournament.

Fan sentiment proved to be highly favorable of the program as well, thanks to the timely and highly personalized nature of the responses. Check out a simple search of @USSoccer_Reply and see the positive fan reactions for yourself.

All in all, the custom jersey campaign from @USSoccer pushed the envelope for social innovation and fan engagement, and in the process left an incredibly helpful blueprint for other teams and organizations to reference in the future.