Employees at Twitter already volunteer and give back to the local community in a number of ways. Three months ago, we introduced a new option at TwitterHQ: #FoodForGood.

Located in one of our cafes, a new serving station called #FoodforGood is the place where Twitter employees can buy a specific menu item such as sushi or chocolate cake (a different one each day) for five dollars. While Twitter provides free meals to employees, this one station does booming business and people are happy to pay because 100% of the proceeds go to an organization in our immediate San Francisco neighborhood.

Executive chef Lance Holton (also known as @birdfeeder) has been instrumental in helping us get this program off the ground.

“The program we do at Food for Good is one food station out of 10 or 11 options,” he explained. “It’s something Dick Costolo (@dickc) really wanted to do, and you’ll see him come down and buy some plates for coworkers.” 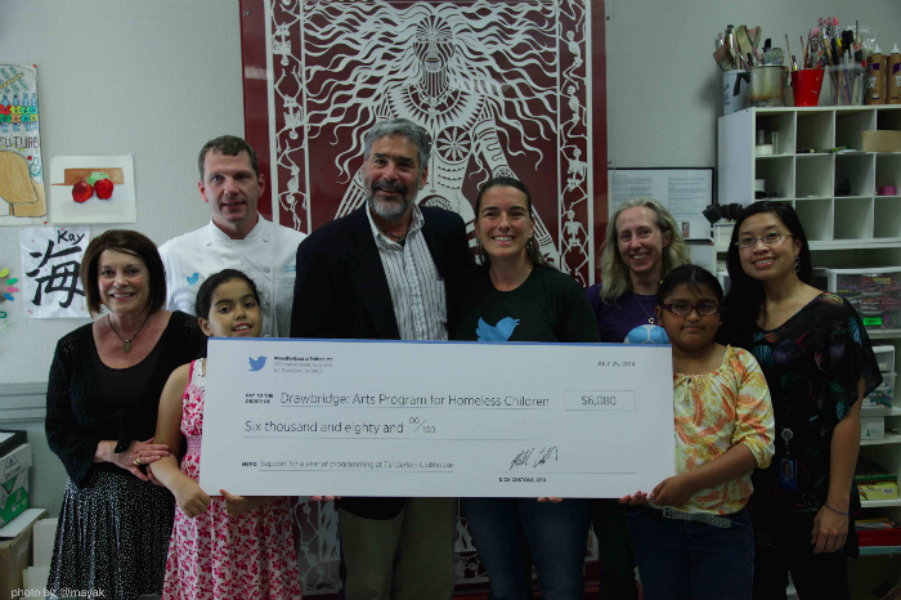 Located at the Boys & Girls Club in San Francisco’s Tenderloin district, DrawBridge describes its mission as providing art programs for homeless and other vulnerable children “in an environment that fosters their sense of joy, creativity and exuberance.” We’re all for that.

On July 25, we walked over to the @drawbridge4kids space and met up with a few folks who work and volunteer with the program, along with some of the budding artists.

Board president Steve Wasserman and executive director Julie Scribner noted that the team is passionate about giving the kids ways to express themselves during difficult times. “Homelessness and poverty is very traumatic for kids and we try to provide a creative outlet for them” Steve said. “We have facilitators who are our boots on the ground and have been involved with the Boys & Girls Club for 7-10 years.”

We asked two young artists about what they’ve enjoyed most. One said her favorite thing was “building a treasure map with stickers and using my imagination because they let me do whatever I want.” Another reported that she did fingerpainting and liked that a lot.

As DrawBridge approaches its 25th anniversary this fall, they estimate they’ve seen 40,000 children at their 20 sites in the Bay Area. Twitter is one of their first corporate sponsors, and according to Julie, “donations like these can help us keep going for another 25 years.”