Thanks to mobile app MixChannel (@mixchan), a phenomenon known as “couple videos” is sweeping Japan. Millions of teens are using the service to create and share 10-second videos, including relationship highlight reels, resulting in more than 2.3 billion monthly video plays. MixChannel, launched less than a year ago by gaming and social media company Donuts, attributes its rapid growth and high engagement to a powerful combination of two product solutions: Fabric and Twitter Ads.

After launching in December 2013, the @mixchan team realized they needed a fast, cost-effective way to acquire and retain new users. To accomplish this, they turned to Twitter.

“We used Twitter to drive the growth of MixChannel because the app is aimed at young people who like to share information, and many young people in Japan use Twitter to communicate,” said product manager Makoto Fukuyama [福山誠].

MixChannel began by integrating the app with @Fabric, Twitter’s new mobile developer platform. To expand on the organic user growth driven by Fabric – and to keep engagement high – they then promoted the app with two recently launched Twitter Ads products: mobile app promotion and tailored audiences.

The Fabric integration enables MixChannel’s users to sign in to the app using their Twitter credentials and connect with fellow MixChannel users who follow them on Twitter, which results in a customized stream of videos. Users can also share any MixChannel video on Twitter with a single click. As a result, MixChannel videos enjoy wide distribution on Twitter, and the app acquires users at no cost. The MixChannel team uses Twitter’s analytics tools to monitor the number of installs driven by this sharing activity.

MixChannel augments user acquisition driven by Fabric with the mobile app promotion suite of Twitter Ads products. By using Twitter Ads, they drive up to 20,000 installs a day at a cost of $1 or less per install.

The affordability of Twitter Ads is an unexpected perk.

There’s no other platform where we can acquire so many users at such a low cost.

According to Fukuyama, the most successful promotional Tweets are those with images that clearly demonstrate the app’s function. MixChannel also uses messaging designed to appeal to the app’s target audience. The Tweet below is an example. Translated, it reads: 10M users are loving this app. 100M successful installs! Featured in “Popteen”! Tons of couple videos. Install now for free. 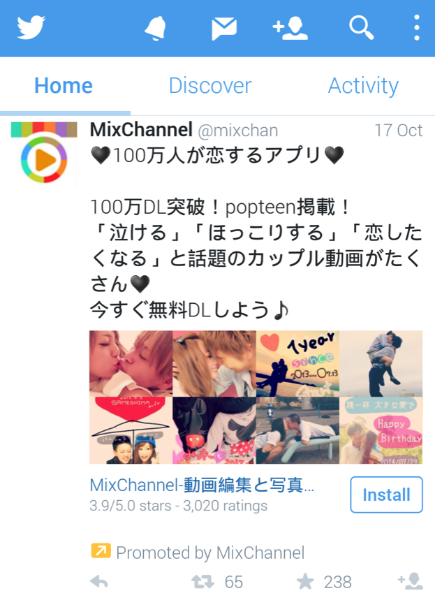 To make sure users continue to be as active as possible, MixChannel uses Twitter Ads’ tailored audiences lists to identify and re-engage the set of users who haven’t recently accessed the app.

“We ran an app engagement campaign to target users who had already installed the app, but weren’t using it,” said Fukuyama. “The ads directed them to a page of popular content, which encouraged them to reactivate. This strategy resulted in a 1.7X higher retention rate and a $0.03 to $0.10 cost per app open.”

This is a Tweet from the app engagement campaign. Translated, it reads: 10K Retweets. Couple videos. Tons of users want to love like them…! Why don’t you be a happy couple by posting your memorable videos and be cheered by everybody.

To learn more about MixChannel’s Fabric integration and success, check out this case study.