Starting this month, consumers will flock to Twitter to have holiday-related conversations about everything from cooking and family to giving and (of course) shopping. Many will also rely on Twitter to discover gift ideas and special deals. According to our latest study with DB5, this engagement drives sales: 54% of users said that promotions they learn about on Twitter motivate them to buy.

For brands looking to boost holiday sales, launching a strong Twitter strategy early in the season is crucial. Read on for more consumer insights and recommendations to Tweet effectively throughout the season.

Twitter users are an ideal audience for retail advertisers. Compared to non-users, they start holiday shopping earlier, spend more and are more prone to impulse purchases. More than a third (34%) have already begun thinking about holiday shopping. And they’re enjoying it: 81% say they love holiday shopping, compared to 56% of non-users.

Not surprisingly, Twitter users also plan to spend more in the coming months than non-users: 24% plan to spend $1,000 or more over the holiday shopping season versus 10% of non-users. They’re spending across a number of advertiser categories. At the top of their lists are clothing or shoes (75%); gift certificates (71%); movies, music or video games (65%) and electronics (63%).

Most users (87%) also said that when holiday shopping, they end up getting a few extra things they didn’t intend to buy — significantly more than the 71% of non-users who said the same.

Tips: Launch your holiday campaign soon to make sure your products command attention: 54% of users said that seeing an advertised offer made them more likely to buy a product. When creating your ads, keep in mind that (1) great prices and (2) positive reviews are what users say most influences their likelihood to purchase. Don’t forget to make your landing page mobile-friendly: seven out of ten Twitter users who purchase gifts online have used a mobile device to do so. 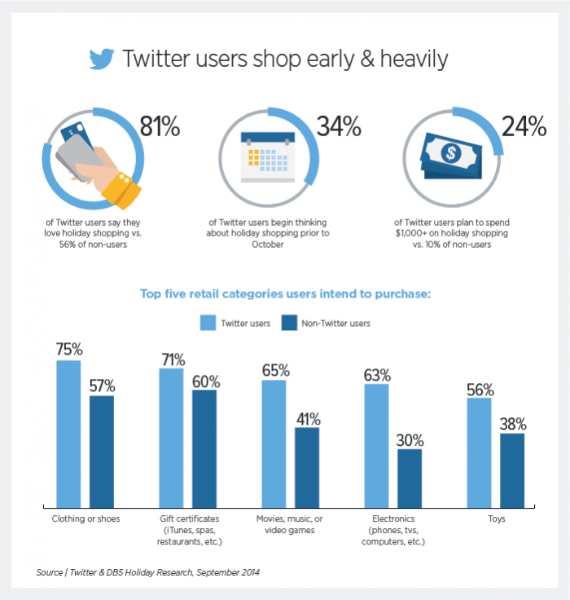 Every year, holiday shopping conversation on Twitter peaks on key days like Black Friday. Why does this matter? Data from Crimson Hexagon and The NPD Group indicates that conversation volume on Twitter is strongly correlated with sales.

Tip: Encourage conversation about your brand when shopping is top of mind, such as on Black Friday and Cyber Monday. You might also try a limited time offer. According to our research, most Twitter users plan to take advantage of limited time offers they see on the platform this season. 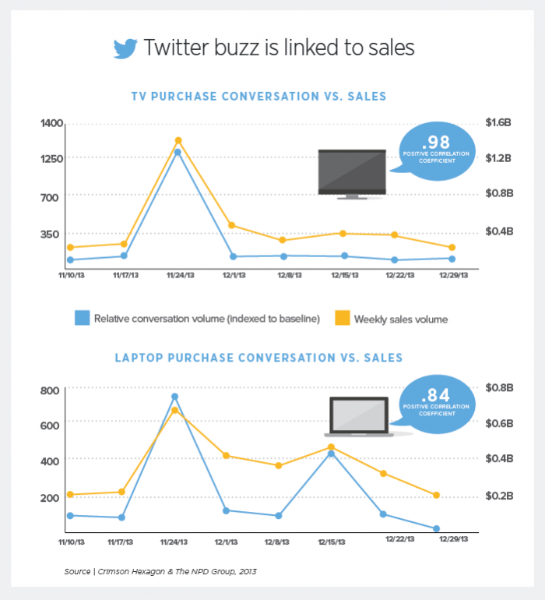 When Twitter users discover new products on the platform, they often end up buying them. More than half of users (52%) say they learned about a product they later purchased because of Twitter, and it’s so convenient to find gift ideas on Twitter that 39% say Twitter serves as their new holiday shopping list.

The mobile nature of the Twitter platform also means that it’s a constant shopping companion. Many users (54%) check Twitter to learn about products when at a retail store.

Tip: Once you’ve launched your campaign, monitor results daily to determine which ad content, format and targeting work best, and optimize accordingly. Then scale your efforts by encouraging users to Tweet about the gifts they’re buying or have received. Users tell us that recommendations from family and friends matter when considering a purchase. 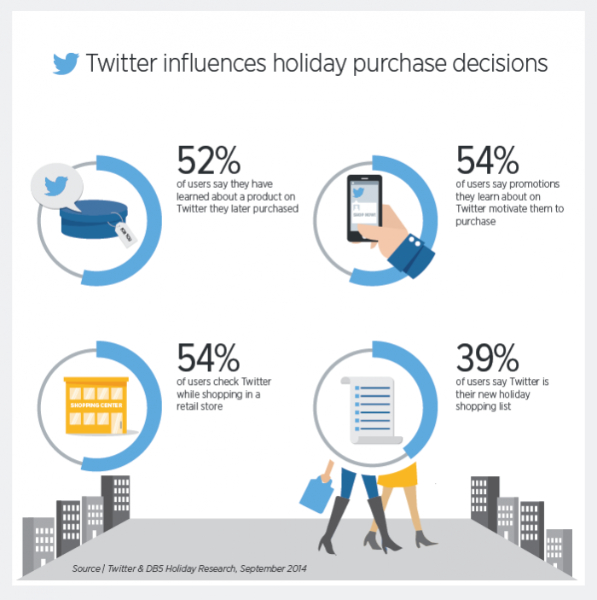 We worked with DB5 during August 2014 to survey 2,100 U.S. holiday shoppers age 13+. More than half of those surveyed said they use Twitter regularly.

We also used consumer electronics sales data from The NPD Group and conversation analysis from Crimson Hexagon to determine the correlation between Twitter conversation volume and U.S. retail sales in November and December 2013.